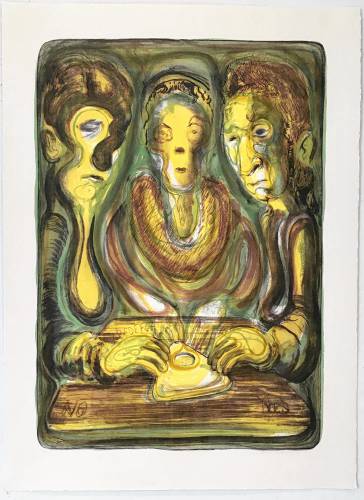 In a short video interview filmed in 2015 after receiving a MacArthur Fellowship, New York artist Nicole Eisenman said she generally had no idea what would happen when she started a new work: â€œEven though I’m doing a preparatory sketchâ€¦ it’s a skeleton, and you have no idea what the qualities of the piece are. It’s always a surprise when I get to the end.

But about 10 years ago, Eisenman, who is best known for painting and sculpture, embarked on a new and focused project: printmaking, a medium in which the artist had previously only touched. And if Eisenman did not know where these prints were going at first, the artist drew on several specific inspirations for the work: the surrealists, the German expressionists and Pablo Picasso, among others.

The fruit of this intense period of Eisenman’s career, mainly during 2011-2013, is now on display in a new exhibition at the University Museum of Contemporary Art (UMCA) at the University of Massachusetts Amherst, which has just reopened in public for the first time since March 2020.

According to UMCA Executive Director Loretta Yarlow, the new exhibit, “Prince”, is the first ever exhibition devoted exclusively to Eisenman’s prints. It presents some fifty works – lithographs, etchings, engravings, prints on paper pulp, wood engravings – carried out from 2011 to 2019, a time when Eisenman worked with a number of publishers and workshops of print in Brooklyn, New York.

It is a panorama of surreal and sometimes caricatural portraits, some in vivid colors, with a lot of funny and biting humor as well as more disturbing images. Gender, politics and environmental degradation are among the themes, and Eisenman also draws on the general human condition and relationships with friends for work.

â€œThe Thinkerâ€, for example, a two-tone lithograph from 2012, represents a Rubenesque female nude lying partly on its side, facing the viewer. A small thought bubble hovers above his head – and inside that bubble is an image of a can of Bumble Bee tuna.

Another lithograph, “Sloppy Bar Room Kiss”, plays with form, showing what appear to be two well-lubricated people, their heads stretched out on a small table that also holds two glasses and a nearly empty bottle of wine. Their mouths are locked in a way that, along with the way the rest of their partially hidden torsos are drawn, almost suggests a two-headed body; there is a distinct Picasso flavor in the print.

Yarlow says she had been intrigued by Eisenman’s work for several years and at one point (before the pandemic) visited the artist in her Brooklyn studio to talk about doing a show at UMass. It was Eisenman who suggested focusing on the footprints, Yarlow noted, and the UMCA director was up for it.

â€œI love how form and content blend so well into their art,â€ Yarlow said.

In addition to the MacArthur “genius” scholarship, Eisenman, born in Verdun, France, but raised in a suburb north of New York, was inducted into the American Academy of Arts and Letters and exhibited in the United States and in Europe, especially in Austria, Germany, Italy, Norway and other countries. She graduated from the Rhode Island School of Design.

Eisenman’s print work is of particular interest to Yarlow because the artist specifically chose to do so, around 10 years ago, so that he could work closely with other printmakers and publishers. As Eisenman recounted in an interview a few years later, they had gone through a painful breakup with a longtime partner and wanted to immerse themselves in a new project.

â€œHaving appointments with three different stores and three different groups of people three times a week really kept me going,â€ Eisenman said. “Having that company, that distraction and that camaraderie was kind of a lifeline.”

â€œI think the fact that she actively collaborated with other people gave this work a different energy and let (Eisenman) experiment,â€ Yarlow said. “It really examines some vital issues of today, like gender and climate change.”

A UMCA side exhibit, “Sideshow: Nicole Eisenman’s Modernist Inspirations,” features prints by early 20th century artists including Max Beckmann, Edvard Munch, Pablo Picasso and others whose expressionist work influenced prints Eisenman. These prints, taken from collections at Amherst and Mount Holyoke Colleges and the UMCA, offer what Yarlow calls “a dialogue between the two exhibitions.”

Edvard Munch’s famous painting “The Scream”, for example, comes to mind when one considers Eisenman’s “Ouija”, a six-color lithograph in which three curved and macabre figures play a sort of sitting around. of a small table. And a number of Eisenman’s prints of people in bars seem to evoke beer garden scenes depicted by German Expressionists of the 1920s.

Eisenman offers their own version of the latter with “Beer Garden”, a very detailed engraving they worked on between 2012-2017. It is a kaleidoscopic painting representing dozens of caricature figures, including a naked woman holding a child in the air. In the foreground, as if viewed directly from above, large gnarled fingers hold a beer mug in which additional character images appear to float atop the mug.

As Yarlow writes in the exhibit notes, Eisenman’s prints “are epic, containing fully formed scenes (from family life to bar scenes) that unfold from zero to zero.”

The figures in Eisenman’s woodcuts range from Picasso-esque, as in “Untitled: Girl with a Tear”, to the absurd: one features a naked artist, a brush stuck in her rear end, the head upside down and looking between his legs.

The artist’s lithographs, perhaps the most gloomy in the work, can sometimes turn political. “Tea Party” features three figures – a skeleton, a big industrial cat and a brooding man wearing a tricorn – holding a scythe adorned with a small American flag.

Faye Hirsch, editor-in-chief at “Art in America,” writes in an essay accompanying a poster for the exhibition that Eisenman, even paying homage to other artists, staked out unique motifs in their etching.

“There are surely few other artists alive today who can translate the black comedy of a Beckmann cabaret so effectively into the weaknesses of a [Brooklyn] bar “, says Hirsch,” or to transform Picasso’s priapic heterosexuality into queer eroticism, or more exactly, to grasp the excesses of the master as a license to represent those of [their] own life and environment.

“Prince” and “Sideshow: Nicole Eisenman’s Modernist Inspirations” will be showing at UMCA until December 5th and from February 3rd to May 1st. A smaller exhibit that opened this spring, “We Are For Freedoms,” continues, and Spanish exhibit notes have been added for it with support from the UMass Amherst Translation Center.

More information on these exhibitions and related events, including a virtual conversation on November 10 with Nicole Eisenman, is available at fac.umass.edu/UMCA/Online/.

Steve Pfarrer can be reached at [email protected]