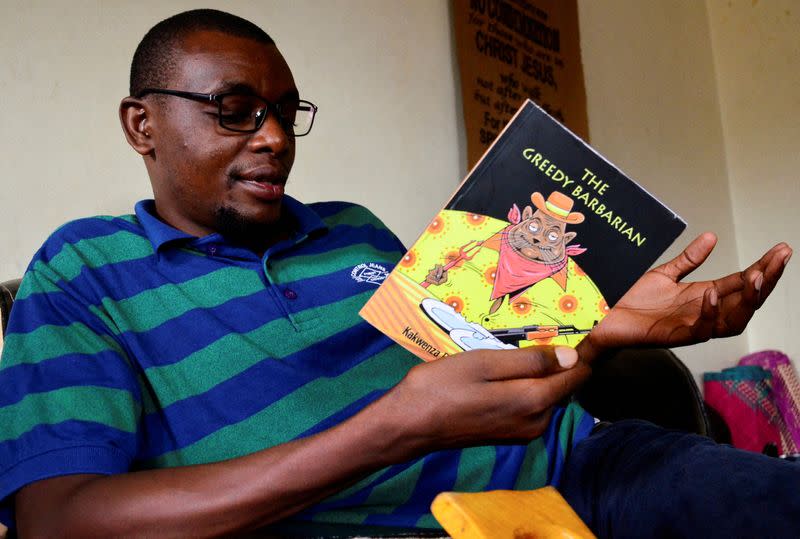 KAMPALA (Reuters) – A Ugandan court on Tuesday ordered the release on bail of an award-winning author and prominent government critic, but he was immediately rearrested, his lawyer said, extending weeks of detention that prompted charges of torture.

Kakwenza Rukirabashaija, 33, is best known for ‘The Greedy Barbarian’, a novel about greed and corruption in a fictional country that has been widely interpreted as a satire on longtime Ugandan President Yoweri Museveni.

Gunmen broke down his doors on December 28 and held him incommunicado at an undisclosed location until January 11, when he was charged with ‘offensive communication’ over tweets about Museveni and his son Muhoozi Kainerugaba , a military general.

Many Ugandans believe Kainerugaba is primed to succeed his 77-year-old father who has held power since 1986 in what critics say is an increasingly dictatorial regime.

On Tuesday, a court in the capital Kampala ordered Rukirabashaija’s release on condition that he pay bail of 500,000 Ugandan shillings ($142), surrender his passport and make no public comment on the case.

His lawyer Ronald Samuel Wanda told Reuters he had traveled to Kitalya to submit the release order papers, only to see a vehicle without license plates drive out of the jail.

Officials told them his client was inside, he said, adding, “We have no idea where he was taken or by whom.”

Another Rukirabashaija lawyer, Eron Kiiza, told Reuters that the author showed signs of torture when security officers took him to his home to search for evidence: marks on his legs and feet, vomiting and urine containing blood.

In a letter to Rukirabashaija’s legal team, the prison service also said a medical examination revealed that his body had “healing scars on his back, buttocks, thighs and hands”, but that the injuries had occurred before he was detained.

Police and military spokesmen did not respond to calls from Reuters to comment on the torture allegations or where he was taken on Tuesday.

In 2020, Rukirabashaija was questioned for five days at the Ministry of Defense to find out if “The Greedy Barbarian” related to Museveni. He was beaten and chained, suffering from a damaged kidney, the author said afterwards.