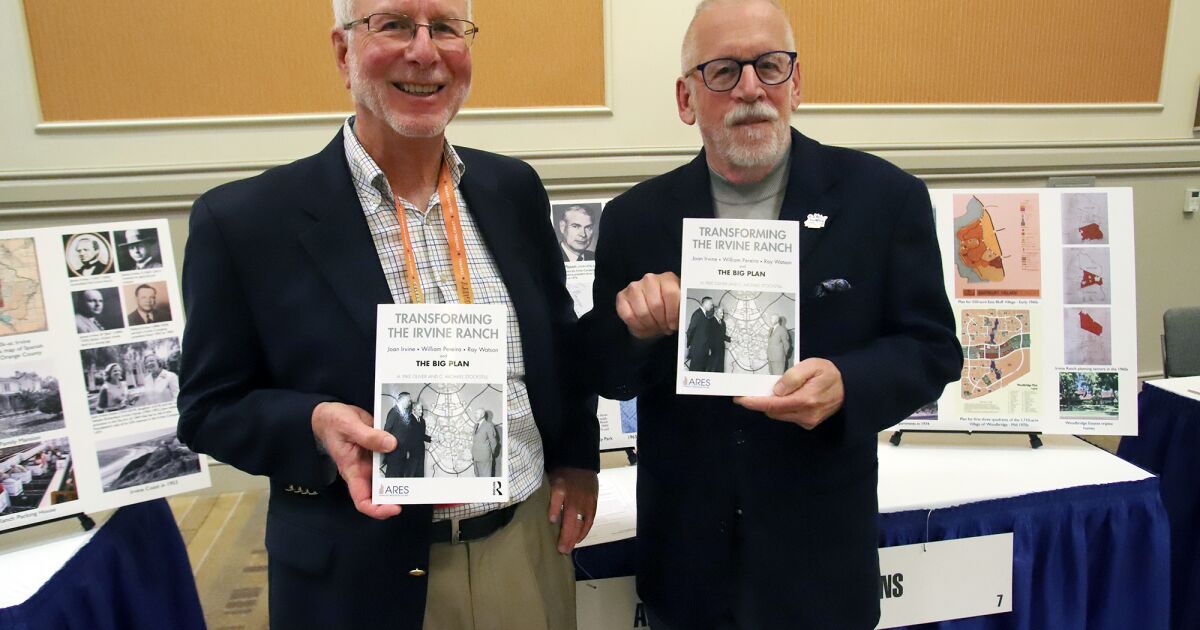 “It was a phenomenal experience for both of us. We had different goals, but we worked a lot together,” Oliver said.

Former colleagues have always talked about writing a book that would chronicle the creation of the Irvine community. Then the pandemic stuck them both in their respective homes, with quite a bit of free time. So they began researching and writing their book, “Transforming the Irvine Ranch: Joan Irvine, William Pereira, Ray Watson and the Big Plan.”

“The book is truly a comprehensive history of the Irvine family, the Irvine Co., the UCI, and to some extent Orange County and the City of Irvine, and all the personalities involved. in that period from 1957 to 1977,” Stockstill said. “It’s a story of how the Irvine Ranch grew from an agricultural empire, just a huge farm, into what we consider to be one of the most successful planned communities in the States. -United.”

“Their lives and their interconnectedness really formed the backbone of the book, if you will,” Stockstill said. “It is important to note that Ray Watson, who had been the president of Irvine Co., wrote six chapters of what he hoped would be his book describing his experiences at Irvine Co. from his arrival in 1960 until his departure. in 1977.”

“We would hear him say from time to time, ‘Oh, I’m going to put that in the book!’ said Stockstill.

Watson never finished his book, but the six chapters he wrote provided an oral history that Oliver and Stockstill could refer to.

Joan Irvine Smith, the granddaughter of James Irvine II, also wrote a book, “A California Woman’s Story”, which Stockstill calls a complete story from her point of view.

Pereira was an architect and planner and was commissioned by the University of California to do its master plan for what became UC Irvine. Pereira was on the cover of Time Magazine in 1963; Oliver remembers seeing a copy when he was a high school student in Marin County.

“It became clear to us that there was an enormous amount of information available,” Stockstill said. “Thanks to the internet and some very helpful librarians in a special collection across the United States, we were able to get a huge amount of first hand data that had been left behind in terms of memoirs, oral histories, documents So it kind of built on itself.

The couple set out to record the history of a pivotal time at Irvine Co., both with backgrounds that lent them the task.

Oliver began his career in real estate development strategies and planned communities in the 1970s, including his eight years at Irvine Co.. He resided in Irvine through the 1980s and 1990s. Before moving to Seattle in 2013, Oliver taught real estate development at Cornell University and directed the undergraduate program in urban and regional studies.

Stockstill worked as a reporter and editor in Orange County before joining the Irvine Co. in 1978, where he spent 13 years implementing a major planning strategy. He still lives in Irvine and is a trustee of the Irvine Land Trust.

Recently, the co-authors, who bear an uncanny resemblance, presented their book to the Anaheim Planning Commission at the American Planning Assn. California Chapter Convention at the Anaheim Marriott.

“The presentation was both a combination of trying to give an overview of what was in the book, but because it was aimed at planners, we emphasized a number of things,” said said Stockstill. “There are three chapters in the book that really detail what the planning philosophy was, how it came about. We talk about Woodbridge as the culmination of everything the Irvine Co. had learned.

Oliver said he was surprised to learn that many conference attendees were unaware of Irvine’s early life.

“We met with planners from Orange County or LA and the Inland Empire, and I asked what they knew about the Irvine Ranch, and they really didn’t know anything about it,” said Oliver.

Since Oliver left Orange County, he always comes back for visits and makes time to catch up with Stockstill. On one such visit, in 2020, before becoming co-authors, Stockstill insisted that they drive to the community they had both helped create. It was during this ride that the two started talking about writing a book together.

“We got together and I said, ‘Hey, let’s go around the ranch. You should see what’s happened since your last visit here,” Stockstill said.

“Coming back and seeing it decades later, in a bigger picture, I was just amazed at how consistently the plan had been carried out,” Oliver said.

The friends then realized that they had a responsibility to share the story of the birth of the great project. It was an opportunity to write history.

“It’s like doing the second draft of the story,” Oliver said. “The first draft would be notes that people write and like what Ray Watson wrote and the university archives, that would be the first.”

Support our coverage by becoming a digital subscriber.