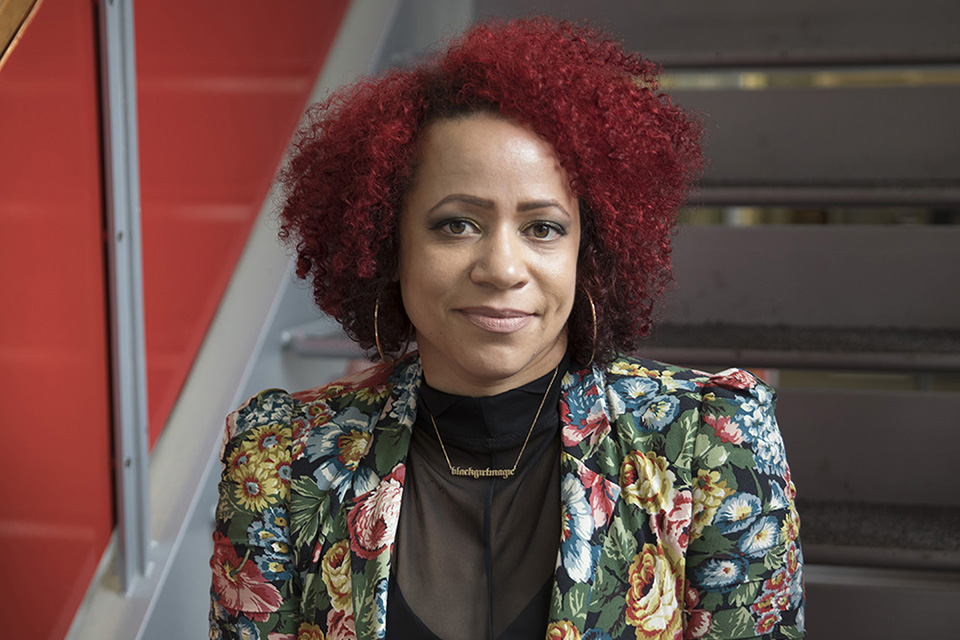 The university’s president hosts a conversation with Nikole Hannah-Jones, creator of the 1619 project

Nikole Hannah Jones was a 16-year-old high school student when the seed was planted for what would lead to her becoming the Pulitzer Prize-winning creator of the Project 1619–The New York Times magazineThe award-winning reframing of American history that puts slavery and its enduring legacy at the center of the American national narrative.

As a teenager, growing up in a small town in Iowa, Ms. Hanna-Jones was enrolled in a black studies class where, she recalls, she first “encountered” the date 1619 as being a date of historical significance. “I remember being shocked to learn that this was the year the first Africans were sold as slaves in America, in the colony of Virginia.”

‘Every American child learns the story of the Mayflower,’ Ms Hannah-Jones said, referring to the legendary ship that ferried pilgrims from England to Plymouth, modern-day Massachusetts, where they established Europe’s first permanent settlement in 1620. And yet 1619 is an event that is completely erased from our national memory – the complete erasure of early slavery in America and the treatment of slavery as an asterisk in American history.

Ms. Hannah-Jones made her remarks during “A Conversation with Nikole Hannah-Jones,” an in-depth virtual discussion that took place on Wednesday, May 5 with the Reverend Brian J. Shanley, OP, president of the university, about of his book, The 1619 Project: A New Origin Story.

The famous writer noted that when she became a journalist at The New York Times magazineshe wanted to use her position as a journalist “in the largest, most important, I would say, news organization in the world, as a platform to place the year 1619 into the national lexicon, to try to force a confrontation with what it means that slavery is one of the oldest institutions in the United States, and to show how the legacy of slavery still shapes much of our modern society in America.

The 1619 Project was first published as a serial in the magazine in 2019, coinciding with the 400th anniversary of the start of slavery in the American colonies. Two years later, Ms. Hannah-Jones adapted and expanded the work into the book. The 1619 Project: A New Origin Story consists of 18 essays, 36 poems and works of fiction.

Noting that he grew up in the suburbs of Boston, MA, “in the shadow of Plymouth Rock,” the father. Shanley acknowledged that he was educated not on the birth of slavery in the colonies, but only on the landing of the Mayflower in 1620, or the Declaration of Independence in 1776, which he described as “the story of freedom.

In response to the university president’s request to describe the contrasts between the 1619 and 1776 accounts of the nation’s origin story, Ms Hannah-Jones said: “We have all learned that 1776 was the founding of our nation, and it was then that Thomas Jefferson wrote those famous English words: “We hold these truths to be self-evident, that all men are created equal, that they are endowed by their Creator of certain inalienable rights, among which are life, liberty and the pursuit of happiness.What we are arguing in the 1619 Project is that there is a parallel story happening – that the man who has wrote these words, Thomas Jefferson, possessed 200 human beings at the time he wrote them.

“And while we think of the story of America and the original 13 colonies as being a story about Boston, MA, and Philadelphia, Pennsylvania,” she continued, “it really is a story about Virginia and Virginians who enslave human beings, even as they write our founding documents and decide to start a revolution they believe is about freedom and liberty.

Prof. Shanley asked Ms. Hannah-Jones to recall the controversy that resulted when a group of historians disagreed with the 1619 Project’s argument that slavery was a motivating factor for some of the settlers who joined the American Revolution. “The role of slavery in the American Revolution has been the most contested and discussed part of the whole project,” she replied. “There might still be people who disagree with that argument and I think that’s fine. But I don’t believe it’s accurate to say it’s wrong.”

Ms Hannah-Jones continued: “The man [Thomas Jefferson] who wrote the original draft of Declaration of Independence was a Virginian whose profession was slave ownership. The father of the United States Constitution [James Madison] was a slaveholder from Virginia. The first president [George Washington] was a slaveholder from Virginia. Ten of our first 12 presidents were slavers. And yet, we were taught that slavery could have nothing to do with the motivations of men at that time.

“I think it really requires a suspension of logic,” she added.

“I understand that it is difficult for us to grapple with the fact that the men who drew the map of the founding of our country and who founded the country on the basis of the ideas of freedom and freedom could be hypocrites, motivated by depriving others of liberty.”

During the event, Ms. Hannah-Jones also answered questions from the virtual audience. A question asked if she had anticipated the intensity of opposition that has arisen from some sectors to the 1619 Project, including legislation that proposes to ban the teaching of the work.

“I certainly expected criticism. I don’t think you can produce major, ambitious work without expecting that,” she said. “And I knew there would be pushback. denial and criticism is one thing. But a legislature that tries to ban the teaching of a job in American journalism just because it disagrees with it, I couldn’t have imagined that.

Asked about the role higher education institutions should take in advancing conversations such as the one that took place at this event, Ms Hannah-Jones said: “The only reason we go to university is to be able to understand the world, so that we can become critical thinkers.

“We should teach our students and engage them in ways that lead them to be skeptical,” she added. “A big part of what you should be doing is introducing your students to texts, thinkers, ways of thinking that completely challenge what they’ve learned conventionally and why they’ve come to know it. For me, this is the highest calling of the teaching profession.