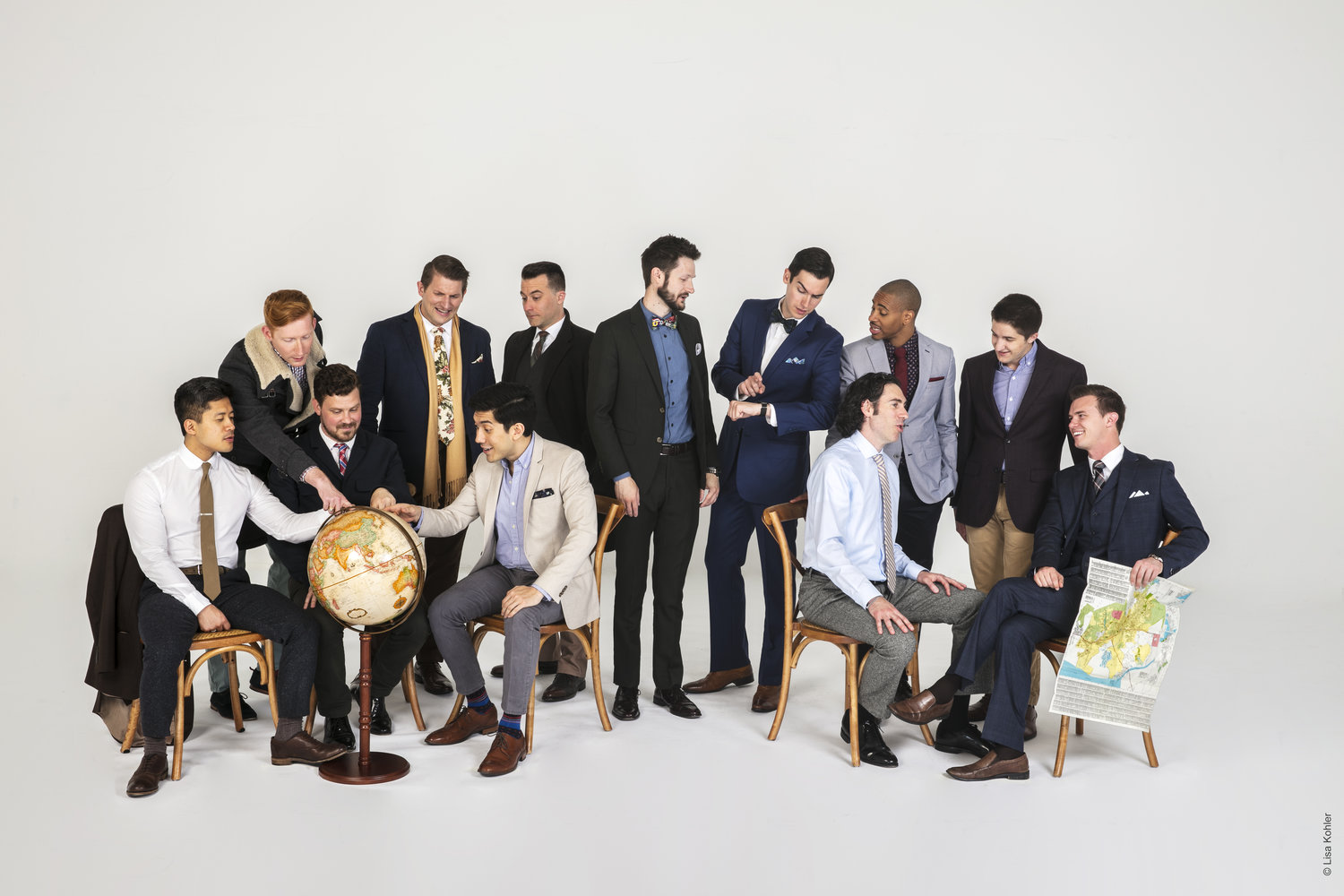 Live music seems to be more powerful these days. Over the course of the conversations, the musicians share with me their deep gratitude and their relief to give concerts again. It must affect the energy and focus they put into each room. These same emotions also motivate the unusually warm and fervent standing ovations audiences have been giving lately.

But I don’t think that this public influence concerns only music. We are collectively in a fragile state due to the continued loss and uncertainty of the lingering pandemic as well as concerns about economic, democratic and environmental instability. Rather than being an escape, the music serves as a relief valve and healing balm.

These thoughts are driven by the fact that I ripped behind my face mask during Chanticleer’s second selection on October 21 at Troy Savings Bank Music Hall. The play was Monteverdi’s â€œLauda Jerusalemâ€ and the text (in translation) begins: â€œPraise the Lord, O Jerusalem, for he has established the bars of your gates, blessed your children and made peace within your borders. Speaking to a friend during the mid-concert break (not quite an intermission), I struggled to explain my reaction to the exquisite vocals amid the dark cloud of contemporary times. Fortunately, I didn’t have to say much. He nodded and replied, “Yeah, all of that.”

Chanticleer’s program was called â€œAwakeningâ€ and the entire first half explored themes of rebirth and renewal. Pieces by James McMillan and Augusta Reed Thomas gave contemporary perspective and musical challenges while communicating a sense of nostalgia. Then came a bouncy series of Hungarian songs about nature and other simple pleasures from Bardos and Bartok. To conclude the first half, Ulysses Kay directed Emerson with simplicity, who concluded “In the mud and the foam of things, there is always, always something singing!”

It went on for 45 cathartic minutes, but please don’t feel like I’ve become a puddle in the driveway. My critical faculties remain in good working order and were tested by the second half of the concert, which was more about entertainment and fun. “Rise and Shine” was the message of the first two selections, an overly elaborate and prolonged arrangement of “On A Clear Day” and a seductive rendition of “Sunrise” by Michelle.

A succession of three substantial pieces on birds has become overdone. â€œThe Bird, Her Punctual Music Bringsâ€, also by Thomas, is the most spontaneous and least intelligent piece I have ever heard from her. Still, its profusion of bird calls wore out the device before the next two pieces could reach it. One of them, “Le Chant des Oiseaux” by Janequin, was a total charm the last time Chanticleer performed at Music Hall, but a lot of silly bird-like pantomimes eclipsed the music.

I can’t help but wonder if I was the only one who found it curious, perhaps ironic, that this all-male San Francisco choir offered as an encore a song called “Straight Street.” Either way, it made us look heavy to bring home.

He’s a lucky man who goes to Troy Savings Bank Music Hall twice in a week. Five days earlier, on Saturday October 16, I heard singer, songwriter and mandolin virtuoso Chris Thile. I first witnessed his talent in â€œBluegrass Journeyâ€, a documentary I saw at the Woodstock Film Festival in 2003 and have always wanted to hear him live ever since. He performs regularly in the region as a soloist and with his bands but I always seemed to have conflicts with the dates. Over the following years, Thile’s career exploded. Among other things, he collaborated with Yo-Yo Ma, was artist in residence at Carnegie Hall and hosted the NPR show “Live From Here”, the successor to “Prairie Home Companion”.

It was worth the wait. The Music Hall was the perfect setting to experience how he plays the mandolin with incredible precision and detail and also draws a surprisingly wide range of sounds. Equally impressive is her agile and broad voice. Most of the selections came from his new album, “Laysongs”, including “God Is Alive, Magic Is Afoot” to a crazy but shallow poem by Leonard Cohen, and “Salt (in the Wounds) of the Earth” a very personal musical monologue on Christianity. Another issue he described as a spiritual one for people who sang in church choirs “but still have a lot of questions.”

There were also two JS Bach selections from Thile’s ongoing adaptations of the partitas and violin sonatas. Thile has paid homage to the acoustics of the Music Hall on several occasions and before playing Bach he started a kind of dialogue with the name of the composer on the ceiling. He playfully apologized to his ancestor for not performing the material on the violin, but I doubt Mr. Bach cares because the transcriptions are true to the original and the performances were lovely.

Schenectady Symphony in the spa town

Schenectady’s Symphony has never lacked ambition, but two Mozart operas in one year is quite an achievement. In the spring, “Cosi fan tutti” was videotaped by Proctors and broadcast online. On Sunday October 24, “Don Giovanni” was performed at Universal Preservation Hall in Saratoga Springs. It was the organization’s first concert since January 2020.

Music director Glen Cortese led a small orchestra of 25 (“Mozart’s size” is the term for that) and a cast of nine singers. Baritone Brian Major in the title role sang with a loud, appealing voice and had a relaxed, confident and almost overly sympathetic presence. Maybe it was part of his plan, Don Giovanni to be a deceptively smooth operator.

Soprano Sylvia Stoner’s Donna Elvira was not someone to play with. His spine was as strong as his high notes. There was a mixture of urgency and mourning in soprano Vedrana Kalas’ Donna Ana, and Casey Gray’s soft tenor voice made his Don Ottavio sound sympathetic but rather helpless. The only major disappointing was bass Brandon Mecklenberg who missed opportunity after opportunity to give Leporello’s juicy role some personality. Witty, smart, or ignorant, any of them could have worked.

The intimacy of the UPH auditorium was heightened by the fact that the orchestra was on the same level as the audience. The singers, using sheet music, took the stage when their roles demanded it. But it was a shock that they were amplified. Many arias and stages have increased in volume as they tend to do, and it is normal for opera singers to inflate their tone as they progress. But sometimes the result was just too strong. The fierce orchestra held up, however.

Cate LeCours’ new dialogue replaced the recitative, fresh and well paced. He may have been inspired by the â€œme tooâ€ movement, but there were no harangues or accusations. One of the funniest moments was when Leporello said to an uncontrollable Don Giovanni, “I’m afraid you are making questionable life choices.”

In addition to releasing details of an upcoming summer season that will return inside the Alice Busch Opera Theater in Cooperstown, the Glimmerglass Festival has also announced the departure of Francesca Zambello after 12 years as General Manager and artistic. It is difficult to overstate the profound changes that have taken place in the organization under his leadership. The name changed from Glimmerglass Opera to Glimmerglass Festival, the repertoire included more contemporary works as well as an annual Broadway musical, and the physical installation received many upgrades.

Zambello has also produced a host of ancillary events such as talks with the late Supreme Court Justice Ruth Bader Ginsburg, forged partnerships with other regional institutions, from museums to breweries, and commissioned a series of new children’s operas. . She will remain in office until the end of the 2022 season and will continue as artistic director of Washington National Opera.

The coming season is atypical with a new pastiche of opera and a double program of contemporary works, as well as two popular maroons. The season opener on Friday July 8 will be “The Sound of Music”, in a new production initially slated for summer 2020. “Carmen” opens on July 16 with the staging of Denyce Graves. “Tenor Overboard” brings together comic moments from Rossini’s operas with a book by playwright Ken Ludwig (“Lend me a tenor” “Crazy For You”). The dual program of new works includes â€œTaking Up Serpentsâ€ by Kamala Sankaram and Jerre Dye, paired with the one-act world premiere â€œHoly Groundâ€ by Damien Geter and Lila Palmer.