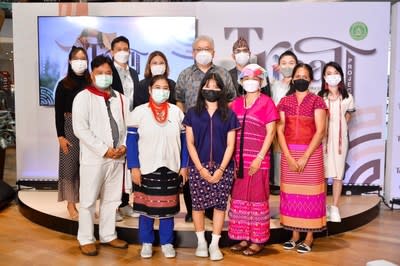 BANGKOKThailand , July 22, 2022 /PRNewswire/ — Department of Cultural Promotion, Ministry of Culture of Thailand in collaboration with ICONCRAFT, ICON SIAM’s creative craft and art zone encourages entrepreneurs to join The Trible Project to promote and create added value and products contemporary to local culture capturing the new generation of consumers . The Trible Project focuses on tribal groups in Thailand who are considered a minority despite their strong cultures. This project helps tribal groups to be able to improve their existing culture by further developing products in a contemporary design that matches current consumer behaviors. Tribal products will be introduced to the new generation market both domestically and internationally, along with marketing and sales promotion. This collaboration will also create alternative careers and increased incomes leading to the preservation of the strong culture of the tribes in Thailand.

Parisa Jataniphan, Managing Director of Retail Concept Store Business Group, Siam Piwat Company Limited, said that “This support counts as one of the activities that reflect the commitment of ‘ICONCRAFT’ which wants to showcase the value of Thainess to all people around the world.By bringing together various kinds of contemporary Thai arts and crafts in one place, providing Thai artisans with the opportunity to expand their talents, add value to their work as well as to increase opportunities and exhibition space, to promote the distribution of products in various projects, both offline and online to be a destination for tourists from all over the world, ICONCRAFT is ready to support the information, knowledge exchange, the list of entrepreneurs and various designers as well as the idea between departments to create flexibility and also provide the venue for the dissemination of promo activities marketing and public relations to ensure that the designer’s work has distribution channels.”

The products of the 4 tribes are available at ICONCRAFT, 4th floor, ICONSIAM of July 15, 2022 and online purchase is also available on Facebook pages with the following details:

A heart-warming blanket in the TASTE FOR TELL collection from the Karen Pow tribe, Uthai Thani Province.
Products can be viewed and ordered at
Facebook page: mademeesook
Phone number: +6690-9945136 or +6687-7144292

Nicco Annan Describes ‘P-Valley’ as ‘Cheers’ at a Strip Club

Writing my first novel was a case of risking my arm