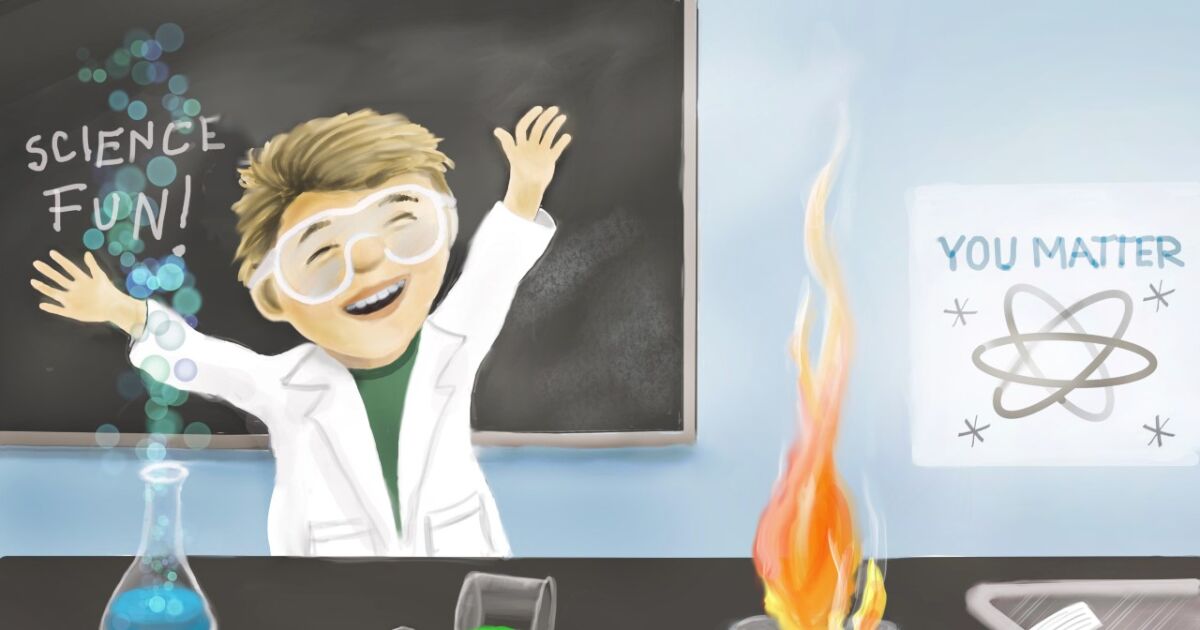 Teachers team up to create fictional chaos in the classroom

Students create explosions in science class, raise a foot to speak, sit on their desks, receive awards for having the most sloppy writing or the most messy desk…

Instead, it’s the script of a book written by a teacher for young students around the world. Say what?

After the pandemic began isolating teachers from their students in spring 2020, Cardiff sixth-grade instructor Johnny Tiersma wrote a children’s book, ‘If I Were the Teacher’.

Its fictional narrative put students in control of the classroom and let their imaginations run wild.

“It was a shock to be torn away from all these relationships with students that I had for three-quarters of the school year,” Tiersma says of the pandemic. “It’s really hard to create a classroom culture when you can’t be with the students.”

Learning should be fun, he reasons. Students must be engaged. They need to feel safe and they need to be able to take risks.

The coronavirus climate has deprived them of that in-person camaraderie. Children worried about their parents’ health, their parents’ work. Home life was unstable. Uncertainty prevailed.

“I focused all my efforts on trying to help them feel as normal, safe and as loved as possible,” says Tiersma.

And he also decided to write an icebreaker book that teachers could share in their class at the start of the school year.

California Teachers Association President E. Toby Boyd ranked Tiersma. He gave it an A+ for creating a book “sure to stimulate interesting conversations and become a story-time favourite.”

During the creation process, Tiersma had no shortage of student editors. He drafted a Google quiz to solicit feedback from as many as 400 young people rating the funny-bone factor of the proposed “student-turned-teacher” exploits.

He had actually tried some of these activities years earlier, like explosive science experiments and mud slides on campus. One rainy day while teaching at a school in Laguna Beach, he organized a mud slide/puddle jump activity instead of sports practice.

‘If I Were the Teacher’, just released this week, is printed by a publisher in Cardiff – Waterside Productions. It is available on Amazon and via the author’s website: ifiweretheteacher.com.

Any correlation between his fictional characters and existing students or teachers is purely unintentional, illustrator Van Der Pol hastens to point out.

Although a drawing that shows children bringing their pets to school depicts a black dog, which he says was inspired by his own dog, Rainier. And a chicken was inspired by Tiersma’s daughter Lucy’s pet chicken.

Van Der Pol, 50, has been teaching art for 29 years and has painted many murals. One, painted in 2017, adorns the clock tower in the courtyard of the Calvin Christian School. But this publication is the first book project for the two teachers.

“I dedicated the book to my wife, my children, and my past, present, and future students,” says Tiersma.

It’s not just writing books that keeps sixth-grade elementary school teacher Ada Harris busy. He writes personal notes that he mails to his students, usually during the first eight weeks but throughout the school year, acknowledging their strengths.

“It’s the most important thing I do as a teacher that impacts kids because they realize I really see them. I recognize the good in them.

Some students respond. Others posted the handwritten notes on the front of their filing cabinets.

The mother of one of his former students said her daughter took her grade to college with her seven years later and posted it on the bulletin board in her room.

Tiersma says the grades show that students are valued and tend to engage more in class.

Meanwhile, the book-writing teacher duo is already starting a sequel: “If I Were Principal.” This will surely encourage their student editors to use their imaginations.