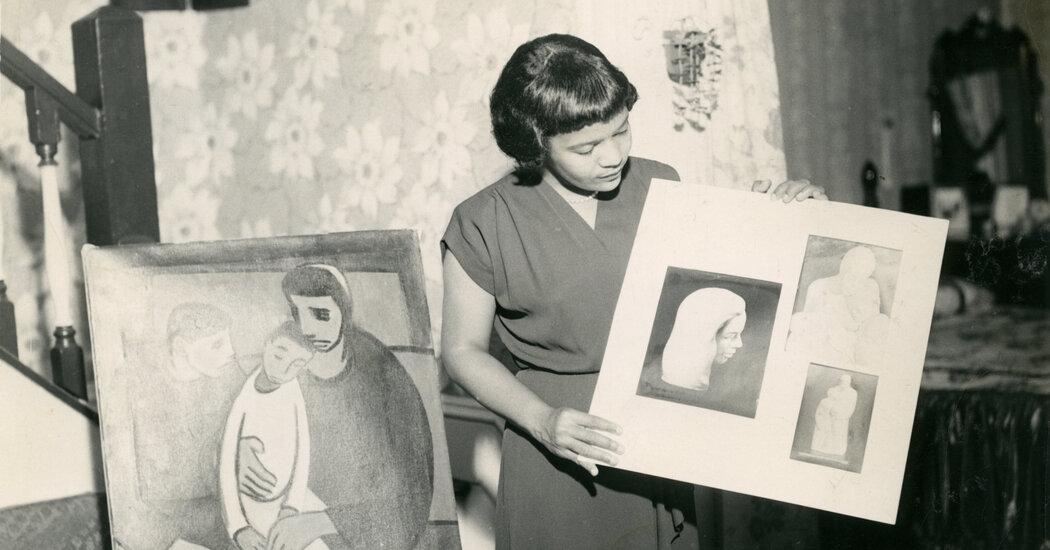 Samella Lewis, a black artist and art historian who did more than expose the racial blinders of the white art establishment, in part by founding a museum dedicated to promoting black arts, died May 27 in Torrance, California, near Los Angeles. She was 99 years old.

His son Claude Lewis said the cause was kidney failure.

Keasha Dumas Heathexecutive director of the Museum of African American Art, the institution Dr. Lewis founded in Los Angeles in 1976, noted his far-reaching impact, calling him, in an email, “a leading voice in research on black art, and a promoter of new avenues for black artists.

“She imagined opportunities that didn’t yet exist for black artists,” she added, “and then she created them.”

In a remarkably varied career, Dr. Lewis has also co-founded an art journal, helped run galleries, made films about black artists, taught at universities, and written acclaimed books, including “Art: Afro American,” first published in 1978. That book (later republished as “African American Art and Artists”) remains influential, said Kellie Jones, a noted art historian at the University of Columbia, which she says is characteristic of Dr. Lewis’ various endeavors: They endured.

“She’s launching a magazine: always in print,” she said in a phone interview. “The museum: still there.

Samella Sanders was born on February 27, 1923 in New Orleans to Samuel and Rachel Sanders. (Two oral histories give her year of birth as 1924, but her son said she came to believe 1923 was correct.) Her father was a farmer and her mother was a domestic worker.

She grew up in Ponchatoula, Louisiana, northwest of New Orleans, and drew from a young age. In an oral history recorded in 1992 by the Center for Oral History Research at the University of California, Los Angeles, she said her first art sale was to her kindergarten teacher, who was impressed with how she had managed a task to draw a pig.

“All the other kids were doing brown pigs, white pigs, so I drew a purple one,” she said. “And I was determined that in doing this pig, I wasn’t going to stay within anybody’s bounds. I just drew lines, but then I moved outside of them. It was as if the pig was vibrating.

She enrolled at Dillard University in New Orleans intending to study history, she said, but at the request of her high school art teacher, she took a first year art class. His teacher was the artist Elizabeth Catlett, who became an important influence artistically and in terms of activism. When they rode the bus together, for example, Ms Catlett would do things like grab the “For Colored Patrons Only” sign outlining the black seats and throw it out the window – a telling action for a young student who had simply accepted the situation racial in Louisiana like the way things are.

“I’m here, sitting there, having grown up in these circumstances, and here this woman comes and disrupts the whole situation,” Dr. Lewis said in the oral history.

“One of the big things I learned in Elizabeth’s class is that you don’t paint people without knowing something about them, who they are and where they are,” he said. she declared. “I was painting these portraits, and she was like, ‘Who is that?’ And I was like, ‘I don’t know.’ ‘Well, why are you painting it?’”

After two years, she transferred to Hampton Institute (now Hampton University) in Virginia, where she earned a bachelor’s degree in art history in 1945.

She continued her graduate studies at The Ohio State University, first studying printmaking and then sculpture, although she encountered some resistance in this genre.

“I ran into issues not only of racism but also of sexism,” she said, “where my teachers felt women shouldn’t do welding” because of the heavy equipment involved. She then turned to painting and deepened her study of art history, developing a particular expertise in Asian and pre-Columbian art. She earned a master’s degree there in 1948 – the year she married Paul G. Lewis, a mathematician – and in 1951 became the first black woman to receive a doctorate. in fine arts and art history at university. An announcement on a university website once called her “the godmother of African-American art”.

In 1953, Dr. Lewis was appointed head of the art department at Florida A&M University, which needed strengthening. According to the book “African Americans in the Visual Arts” (2003), by Steven Otfinoski, she once told the president of the university that she would paint her portrait in exchange for additional funding for her department.

The Lewises became active in civil rights issues, and harassment from the Ku Klux Klan and others led them to leave Florida in 1958, when Dr. Lewis took a teaching position at State University. from New York to Plattsburgh. In 1966, she took a position at California State University at Long Beach. That same year, she directed the first of several short documentaries, “The Black Artists”, an investigation into African-American art.

Although she spoke about black art and artists, Dr Lewis said that, particularly in her teaching, she tried to draw on her expertise in Asian art and other fields to establish connections.

“I never gave a class where I closed the door: ‘This is African art and this is Caribbean art,'” she said in the oral history. “I tried to show the interrelationships.”

But as the 1960s grew more strident, so did she on the subject of white domination of the art world. In late 1968, she left academia to become an education coordinator at the Los Angeles County Museum of Art, hoping to elevate black art there.

“Anyone can have a quick black show,” she told the Los Angeles Times at the time, but she was looking for more substantial change. She lasted just over a year before quitting, so frustrated with the lack of progress that she picketed her own museum.

“We went through many periods – slavery, emancipation, underpaid and overworked, pacification, integration, trying to prove something instead of living in our own homes,” she told the Progress-Bulletin of Pomona, in California, early 1972. “I’m sick of this self-show.

In 1969, with Ruth Waddy, she published “Black Artists on Art”, forming her own publishing house, Contemporary Crafts, to do so. In it, black artists spoke, some vehemently, about their work and the obstacles they faced. The book (which was followed by a second volume in 1971) shook the art establishment and the people who covered it, including William Wilsonart critic for the Los Angeles Times.

“Artists’ statements range from modest affirmations of a desire to make art of value, to frankly militant rejections of ‘the intellectuals and pseudo-intellectuals who dominate the art scene’ and white culture in general” , Mr. Wilson wrote in a review. , in which he seemed to find the book’s challenge off-putting.

Dr. Lewis was also looking for ways to circumvent the white establishment. She had previously helped establish the National Artists Conference, a professional organization for black artists, which continues today. And after leaving the museum in Los Angeles, she was one of the founders of the Multi-Cul Gallery in Los Angeles, which focused on black art and selling works at prices that almost everyone everyone could afford.

Dr. Lewis resumed teaching in 1969 at Scripps College in Claremont, California, where she remained for 15 years and which is now home to the Samella Lewis Contemporary Art Collection. Over the years, she has organized numerous exhibitions in galleries and museums.

And throughout her busy life, she found time to create her own art. His paintings and prints have been exhibited in solo and group exhibitions across the country.

Her husband died in 2013. Besides her son Claude, she is survived by another son, Alan, and three grandchildren.

At a conference in Columbus, Ohio, in 2000, Dr. Lewis explained simply why people should respect artists of all races and backgrounds and try to hear what they say.

In Patrice Nganang’s trilogy, Cameroon’s past is still very present