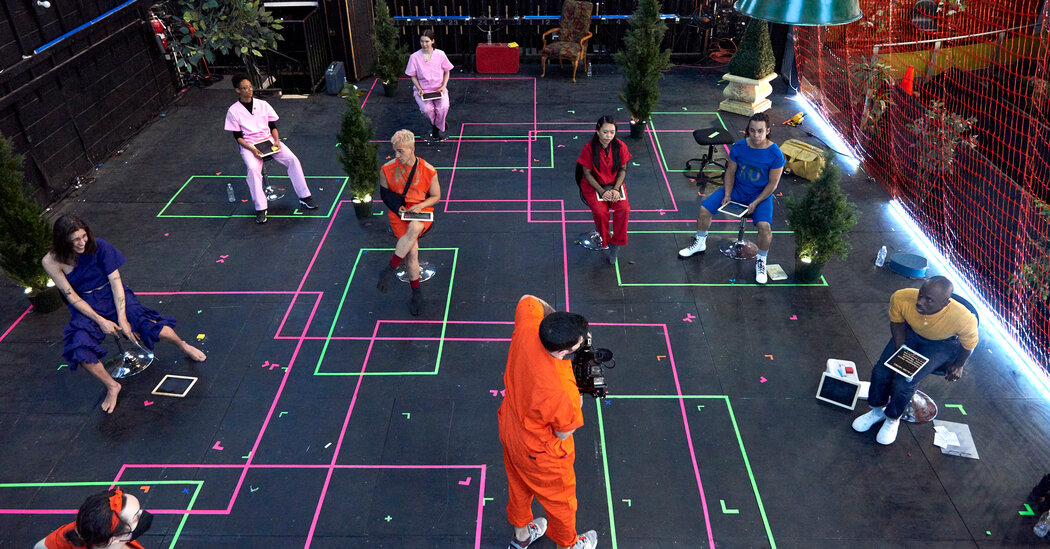 Raja Feather Kelly and “The Kill One Race”: TV and Theater

There is reality and fiction: an easy distinction to make, right? Well, things aren’t always so crisp and clear, especially when you consider the performances we undertake in our real lives and the fictional stories that borrow from reality – the boundaries between what is true and what is. false often fade.

In Playwrights Horizons’ new series, “The Kill One Race,” reality TV meets the theater for a review of how we shape our values, relate, and bounce between the realms of reality and fiction in our entertainment and our daily life. This streaming production and another recent digital theater hybrid, “This American Wife,” reflect how the particular combination of theater and reality TV can complicate viewers’ contract with the art form and their understanding of what it is. is artifice and truth.

â€œThe Kill One Raceâ€, conceived by choreographer Raja Feather Kelly and his company Feath3r Theory, takes us into a dystopia where 24-year-olds become competitors in a reality competition full of social experiences. The most ethical person in the group is granted the honor of dying and entering Empire, a Xanadu wave of eternal comfort and righteousness.

Seven characters compete against each other over seven days full of challenges, stratagems and manipulations. You might be thinking of “The Hunger Games” or one of the myriad other dystopian works of fiction that involve supervised competitions. Despite the proliferation of these stories, I was still surprised by the theatrical variation brought to the theme. Filmed at Playwrights Horizons and released in eight overly long episodes, “The Kill One Race” so closely mimics the style of “Big Brother”, “The Real World” and other classic reality series that “theater” resembles in a terrible insufficient way to describe it.

Kelly, who also directs, borrows the genre’s filming conventions, with many shared screens, confessionals and voyeuristic close-ups. He uses the techniques so well, in fact, that naturalism is shocking – confusing, even. The cast’s performances are also so accurate and understated, with each actor having such a clear understanding of their character’s disposition and way of thinking that the ethical discussions seem eerily real.

This is what tripped me up (aside from the long production run and the fascinating but equally lengthy discussions of Ethics 101): Was I watching some sort of social experiment, staging real people responding in real ways in the scaffolding of a fictional world?

It reminded me of the discomfort I felt watching â€œThis American Wife,â€ with its meta-piece on the Bravo franchise â€œReal Housewivesâ€ that reproduced actual scenes and dialogue from the shows alongside scripted and improvised material. In my review, I wondered what was improvised, what was borrowed from the franchise, and what was real.

My problem has to do with the question of artifice and honesty – worthy of an ethics show. I avoid watching reality TV dramas because the performance of these so-called “real” scenarios is too transparent. They feel dishonest, parodies of reality despite the shows to the contrary. And it extends beyond the frames of the television screen – the carefully curated fiction of the characters ‘stories and their relationships with each other are part of these individuals’ stardom. It’s profitable.

While theater is also not an art form of total honesty, it is its own kind of artifice; the difference lies in the presentation of this fiction. In the theater there is the expectation of fantasy – we sit in an audience and wait for the curtains to open. When we enter a theater, we agree to suspend our disbelief for the duration of a performance. Reality TV, however, portrays lives that go on without intermissions and characters that actually exist in the world.

When these two realms collide, then, as they do in “The Kill One Race” and “This American Wife”, it warrants a renegotiation of terms between theatrical production and audience – a redefinition of the art form. and what is generally known. and expected from it in its most traditional forms.

I have expressed my unease at this collision between reality TV and â€œhonestâ€ theater fiction, but that does not mean that it is an aberration – even an error – that the productions must avoid. In fact, such contortions and hybridizations of theater and other media allow art to confront audiences with their preconceived ideas about what stories to tell and how. Ultimately, perhaps the truest feelings lie somewhere in the space between reality and the theater.

The KILL ONE race
Until July 4; thekillonerace.com

Sino-Scottish collaboration in the spotlight despite the pandemic