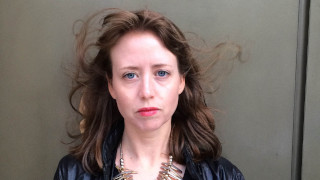 Laura van den Berg’s most recent book is the much-loved collection of short stories I hold a wolf by the ears (FSG, 2020), which NPR called â€œexquisiteâ€. Other books include the novel The third hotel (FSG, 2018), named best book of 2018 by The Boston Globe, Huffington Post, Electric Literature, and Hub on, and two other collections of stories, The island of youth (FSG, 2013), and What will the world be like when all the water leaves us (Dzanc Books, 2009), as well as the novel Find me (FSG, 2015).

The New York Times says of I hold a wolf by the ears, “The elegant and surreal stories of van den Berg’s new collection, embellished with daring comedies, offer portraits of desperate women.” The Los Angeles Times says, “an ecosystem of weird and moving places that you’ll want to revisit, reconsider, maybe even shelter in … slyly brilliant.”

In addition to the 2021 Guggenheim Fellowship, van den Berg’s honors include the American Academy of Arts and Letters Rosenthal Family Foundation Award, Bard Fiction Award, MacDowell Colony Fellowship, Foundation Fellowship Civitella Ranieri, a Pushcart Award, an O. Henry Award, and the Jeannette Haien Ballard Writer Award. The island of youth was named “Best Book of 2013” by more than a dozen outlets, including NPR, The Boston Globe, and O, Oprah magazine. Find me was selected as “Best Book of 2015” by NPR, Free time in New York, and BuzzFeed. His stories have been published in many renowned magazines including Kenyon review, American fiction short film, Plowshares, and A story, and were the subject of an anthology in The best American news, America’s Best Mystery Stories, The O. Henry Prize Stories, and The best non-compulsory American reading. His reviews and essays have been published in The New York Times Book Review, O, The Oprah Magazine, BOMB Magazine, and Vogue.com.

She recently taught creative writing in the MFA program at Columbia University, the Fine Arts Work Center in Provincetown, and the Bread Loaf Writers’ Conference. She is a Briggs-Copeland Lecturer in Fiction at Harvard University and also teaches in the MFA Writers Program at Warren Wilson College.

The event is free and open to the public. Everyone is welcome. Register here.