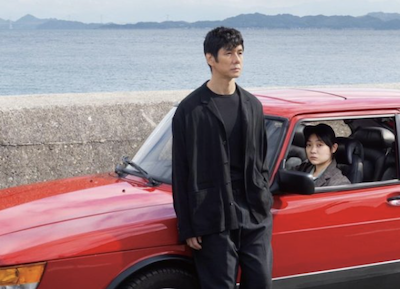 BOUNDARIES DEFINE THE LIMITS. Geographic boundaries, fences and rivers mark physical boundaries. There are also invisible, less concrete boundaries – boundaries between oneself and another, between different cultures, between past and present. What does it mean to cross these physical and metaphysical boundaries? Without a doubt one of the most important and exciting filmmakers in contemporary cinema, Japanese director Hamaguchi RyÅ«suke explores this question in his latest film, Drive my car, an adaptation of the eponymous short story by Murakami Haruki.

A veteran who has already been making films for nearly two decades, Hamaguchi has slowly gained a staunch supporter around the world. In a conversation with Hamaguchi in Busan, Bong Joon-ho (Parasite), a self-proclaimed admirer of Hamaguchi, describes him as a filmmaker of rare conviction and focus. And as editor-in-chief of the South Korean cinema magazine Filo describe Hamaguchi’s cinematic style beautifully, the camera in his films seems to ‘accompany’ the characters rather than depicting them relying on ‘dead times’ through long shots, emphasizing a certain sense of’ respect Towards the human rather than a distinct style or aesthetic notion. This sense of “respect” in his films is ingrained in Hamaguchi’s documentary style, also evident in his non-fiction and fictional works. Together with Sakai Ko, he has produced a major trilogy of documentaries on the individual stories of various people affected by the Fukushima disaster (The sound of the waves, Voice of the Waves: Kesennuma, and Voice of the Waves: Shinchimachi). His 2015 film, Happy hour, a dramatic tour de force that explores the changing relationship between four women in Kobe, Japan, presents nothing less than miraculous performances as unprofessional actresses under the patient guidance of Hamaguchi. And with this year Drive my car, his second literary adaptation after Asako I & II in 2018, Hamaguchi again uses his documentary approach by adapting the literary material of Murakami Haruki, whose short stories, with their unique atmosphere and their unsaid, have inspired imaginative films like that of Ichikawa Jun Tony takitani (2004) and Lee Chang-dong Burning (2018).

Originally published in 2014 as part of the Men without women collection, Murakami’s “Drive My Car” follows Kafuku, a fifty-something actor working in film and theater, with the loss of his anonymous partner to uterine cancer. During their marriage, Kafuku’s partner slept with several young comedians, to which Kafuku, a talented actor that he is, closed his eyes. It is only after the death of his companion that Kafuku fights never to have questioned her about her infidelity: â€œThe question never ventured, the answer was never offered. Outside of the story’s main triadic relationship with Kafuku at the center, there’s Misaki Watari, a 24-year-old from a fictional town of Hokkaido. Described as ugly in complexion with a scar on her face, Misaki, hired by Kafuku, drives him to television studios and theaters. She’s “one hell of a driver,” says an auto mechanic, her flawless driving skill sort of “too smooth, too mysterious.” Murakami’s third-person narrator gives clues to Misaki’s past: her alcoholic mother died in a car accident, her father abandoned her as a child. But at the end of the day, the story centers on Kafuku and his lingering obsession with his late partner’s promiscuity (“the very hand that touched his body”). Characteristic of a short story by Murakami, â€œDrive My Carâ€ ends on a note of comfort for the male protagonist: â€œMisaki did not respond. She studied the road quietly. Kafuku was grateful for his silence.

Traduttore, traditore – the translator is the traitor. If adaptation is a translation process that inevitably undermines the original work, then the Drive my car is a sprawling betrayal that crosses the borders of the “original” to venture into unknown territories. Several additional elements and layers in Hamaguchi’s film distinguish the work from that of Murakami: Hamaguchi first gives a name to Kafuku’s partner – Oto, literally meaning “his”. It is no coincidence that Hamaguchi graphically matches the movement of a tire wheel on Kafuku’s red Saab 900 with the spools of a cassette. Whenever Kafuku is in the car with Misaki in the driver’s seat, he turns on the tape – Oto’s partial playback of Uncle Vanya. Oto’s recording, a holdover from the past, follows Kafuku, her haunting voice reverberating around the car as she moves to various locations. This haunting works precisely because Kafuku and Oto’s past relationship serves as a long prelude to the film’s current main plot.

Hamaguchi’s adaptation refers to the Latin meaning of translation – trÄnslÄtiÅ, or moving something between two places. You could even say that Hamaguchi’s film is all about movement: the transport of bodies, memories, emotions and stories from one place to another. Oto’s storytelling speaks of this older sense of translation. In Hamaguchi’s film, Oto is an actress turned television writer. The film begins at dawn, with Ishibashi Eiko’s mysterious electronic track highlighting the opening’s temporal liminality. In her room, Oto, plunged into darkness, rises from the bottom of the frame as she begins to tell the story of an anonymous high school girl who sneaks into the house of Yamaga, her first love and classmate. With themes of tacit exchange, a psychosexual dimension, and even karma involving a parasitic lamprey, Oto’s erotic murder story is the essence of a luscious late-night TV drama. As the film progresses, we gradually learn that sex is an integral part of Oto’s storytelling. After the loss of their four-year-old daughter, a traumatic past between the couple, Oto relies on her sexual orgasm to tell stories and tells them to Kafuku during sex. Like the good archivist that he is, Kafuku listens, remembers and tells him the story the next morning. Sex is the means by which an unborn story crosses the line between the real and the symbolic. By adding this new element to the film, Hamaguchi emphasizes the translational aspect of storytelling in its most important way. And even though a potential betrayal resides at every step of this transfer process, it is still possible, if not necessary, to keep faith in what crosses the boundaries of communication.

Talking about this idea of â€‹â€‹transference is the very act of driving. And it is Misaki, played by Miura TÅko, who animates the pivotal moments of the film. Unlike Murakami’s story, Misaki is a more palpable presence in the film. In Hamaguchi’s reimagining, Misaki transcends the role of a passive confidante; she is active witness to Kafuku’s adaptation process, the camera capturing his calm and firm resilience. At a critical point in the film, Kafuku proposes that they both travel to Misaki’s hometown of Hokkaido. As they enter the fictional city after their long drive from Hiroshima to Hokkaido, the film becomes silent – an abundant, almost sacred silence that Hamaguchi wants audiences to feel. The two go to a site of trauma, and one can’t help but remember the recent disasters in Japan. The two face their own ghosts – searing regrets for Kafuku and family trauma for Misaki. Above all, Hamaguchi reserves the very last sequence of the film not for Kafuku but, instead, for Misaki. We see her shopping in South Korea with a mask on her face, signaling that she is going through the current era of the pandemic. The red Saab sedan now has a Korean license plate. His scar has now disappeared from his face. With her canine companion, she rolls away, her destination unknown.

This open conclusion of the film, with Misaki relocated to another country, brings us back to the issue of the film: the question of borders and borders. At the most fundamental level, Hamaguchi is interested in self-boundaries and crossing those boundaries through performance or intimacy. Linguistic and cultural boundaries are also crossed in the film. While Murakami’s story only briefly mentions Uncle Vanya, Hamaguchi transforms this element into a full-fledged multilingual production. Actors from Japan, Taiwan, the Philippines and South Korea participate in Kafuku’s ambitious theatrical project to get to the bottom of reality in Chekhov’s play through a Bressonian discipline of actors. Among the set is the film’s most notable character, Lee Yoon-a, played in a low-key but wonderful way by Park Yoo-rim. A former deaf dancer, Yoon-a uses Korean Sign Language in her portrayal of Sonya. In one of the film’s most poignant sequences, Yoon-a tells Kafuku via translation that his body was able to recover thanks to Chekhov’s text when he “enters” his body. For the traitor translator Hamaguchi, communication is a process of translation that passes from one human to another, from one language to another, between the performer and the character, between the text and the body, between the animal. and the human, between the past and the present. .

And there is yet another kind of border that Hamaguchi crosses in the film. As Kafuku arrives at Narita airport to board his plane to Vladivostok for his business trip, he receives a sudden email from the theater festival secretariat: his flight has been canceled due to the wave. cold. Surprisingly, the contents of this email appear on the screen. This is not a trivial gesture on Hamaguchi’s part. After all, he could have opted for an alternate route of viewing the content of that email via voiceover narration or a direct shot of the email itself. In many works of contemporary cinema, the invasion of text in the cinematographic setting generally works either to mimic the generational habit of listening to smartphones quickly, or to criticize this habitual behavior. Neither seems to be the case in Hamaguchi’s film. It’s a more benevolent, almost generous gesture, because Hamaguchi opens up the very borders of the film’s frame to make it more porous to foreign elements, even if it means giving up the sacredness of what is inside the frame. The pleasure of watching Hamaguchi’s films, striving to reach sprawling territory rather than a hermetically readable field of vision, lies precisely in witnessing such gestures.

All references to Murakami Haruki’s short story are based on the translation by Philip Gabriel and Ted Goossen. East Asian names are listed in first and last name order. The author would like to thank Elizabeth Keto and Chaorong Hua for their stimulating conversations and suggestions.

Eugene Kwon is a doctoral candidate in the East Asian Film and Media Studies and Literatures program at Yale University.

Review To Rescue the Republic: Grant, the Crisis of 1876… and a Fox News anchor reluctant to challenge Trump | Books

‘Who’s the boss?’ Sequel with Tony Danza and Alyssa Milano in the…

Symposium on multi-domain integration held at the Defense Academy

A relationship therapist ranks the most problematic Disney romances