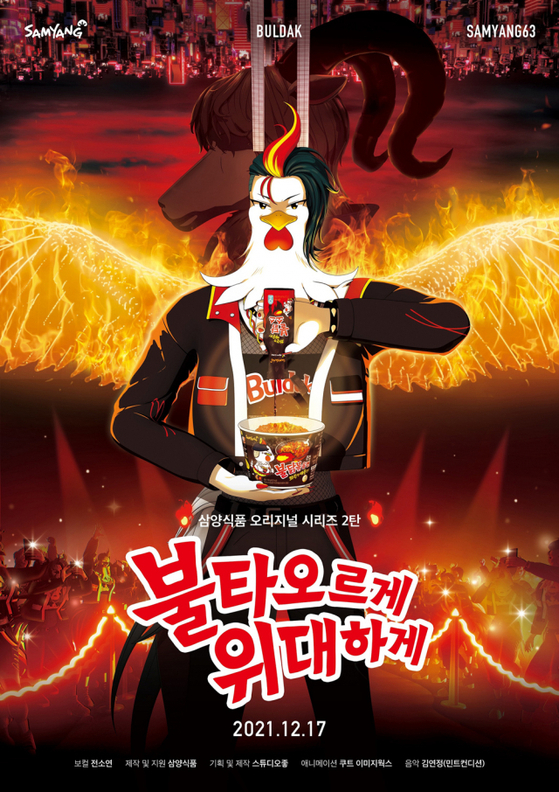 No “universe”? Good luck with your marketing!

To add spice to its advertising campaigns, a food company evokes a universe in which a chicken sings rebellious and a goat is crying.

The big buzzword in Korean marketing circles these days is universe, fictional worlds built around characters like Buldak, the personified symbol of Samyang Foods’ popular spicy noodle Buldak Ramen. Don’t call them mere mascots like Captain Crunch or the Hamburglar. These characters have stories and, put together, the stories create a world or a universe. Stories refer to the product, of course, but also evoke emotions that build customer appreciation for the product, or simply entertain.

Studio K110, the local ad agency behind Samyang’s advertising campaign, was acquired by Kakao last December. Kakao said his strength as a content creator was the main reason for the acquisition.

“Universe-based campaigns can be marketable content in themselves,” Studio K110 creative director Nam Woo-ri told Chosun Ilbo in January 2022. “They can be serialized and the video itself is content.”

Samyang released two videos for its advertising campaign, one in September 2021 and another in December, where Buldak and former mentor Samyang63 explain the taste of ramyeon.

Samyang63 is a goat-themed character that symbolizes the company’s classic Samyang Ramen, which has been a regular seller since 1963. In the first video, Samyang63 is a self-aware old jerk. He sings “I’ve Barely Been Noticed For 60 Years” in a three-minute song called “Ordinary Yet Extraordinary”. Although Samyang63 laments that everyone thinks he’s nothing special compared to Buldak, he thinks “the best taste is the familiar one”.

Buldak represents the new spicy product, Buldak Ramen. In her video, Buldak states that she will “break all shackles” and “challenge stereotypes” in a song called “Blaze for Greatness.” Soyeon from K-pop girl group (G)I-DLE performs the voice of Buldak.

A screenshot of Samyang Foods promotional video on YouTube [SCREENSHOT]

“The videos were really unique for an ad campaign, with all the musical elements and character designs,” said Lee Hye-ryung, spokesperson for Samyang Foods’ public relations team.

“Samyang Ramen is one of our key products, but since its release decades ago, we wanted to convey the story of her brand and what it symbolizes to younger consumers who don’t feel as connected to her as previous generations,” Lee said.

Binggrae, a major food company in Korea, is working on its own universe, also created by Studio K110. Famous for its banana milk and ice cream, the company made Prince Binggraeus the epitome of the brand’s identity.

Prince Binggraeus wears an orb that resembles a tub of Binggrae’s popular vanilla ice cream and wears a crown that resembles the distinct tub-shaped container of the company’s signature banana milk, which has been selling steadily since 1976.

Now in the third chapter of his story, Prince Binggraeus bravely fought against the Duke – who turned out to be his father! – ascended the throne, fought a mortal enemy, went to a royal academy, and fans are still waiting to see how his story will unfold.

Thanks to the prince, Binggrae became Korea’s top food company with over 100,000 YouTube subscribers in February 2021.

“Prince Binggraus was popular because the younger generation tends to be digitally savvy, prefers unique experiences, and enjoys sharing fun times with each other via social media and messaging services,” he said. said a Binggrae spokesperson.

Probiotic drink manufacturer Hy has also created its own universe.

Each member of Hy-Five represents a popular product: “hot frappuccino boy” Kupffer for Hy’s Kupffer’s hovenia drink; the green-haired girl Yachoo for the vegetable drink Haru Yachae; the beautifully styled Ddoori for MPRO3; blond boy Kurr for Yakult Light; and finally, the leader of the group Wirr for Helicobacter Project Will yogurt drink. Hy-Five released their debut single “Superhero” last September, followed by “You’re My Love” in December. Both songs are available on local music streaming services, including Melon and Genie. The performance video for their first song garnered around 160,000 views, while the music video for the second song was viewed over 670,000 times on Monday.

Food manufacturers with a long brand history were the first to adopt fictional storytelling in their branding. Binggrae launched Prince Binggraeus in the company’s 53rd year, and Samyang Foods’ advertising campaign for Buldak and Samyang Ramen was created to commemorate its 60th anniversary. Hy was established in 1969 and created Hy-Five in its 52nd year.

The companies’ goal was to improve the image of their brands, and the fact that consumers already knew their products helped them create product-inspired personas and connect with the younger generation.

It’s not just the food companies involved in building the universe.

Hyundai Motor released a YouTube video for its “metamobility universe” in collaboration with non-fungible token brand Meta Kongz in which a gorilla character, Meta Kongz, drives Hyundai’s Pony sedan from Earth to the Moon. The automaker has announced that it will open an official NFT website in May and release NFTs featuring the Meta Kongz character.

LG Household & Healthcare released NFTs featuring mascots for its skincare brand Belif in March. Belif’s Billy is a fairy who works in a herbalist connected to “the Other World”, the world of the fairies. The herb store is located somewhere in Edinburgh, Scotland, according to Billy, and offers magical herbal products.

Companies are trying to appeal to the so-called MZ generation, or millennials and generation Z born between 1996 and 2010.

“Unlike traditional media [like television]consumers have access to content whenever they want, and companies are adapting their promotional content to such a change in the media environment by using interesting characters,” said Lee Eun-hee, professor of consumer studies at the Inha University.