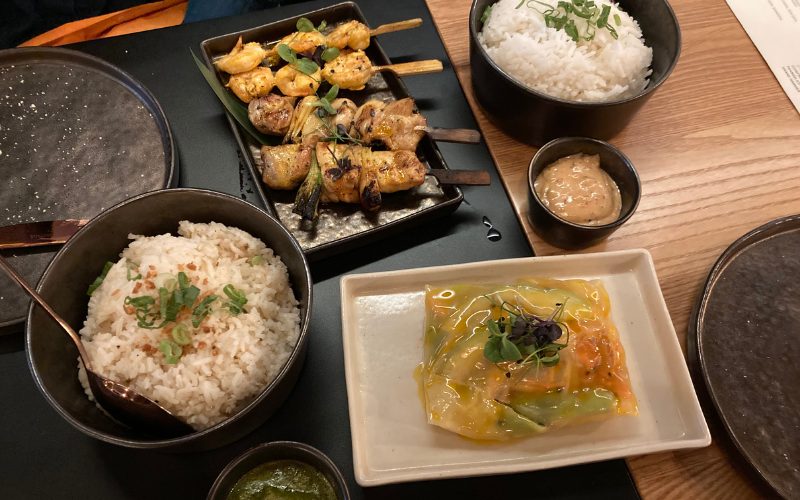 Bringing a new twist to a range of meats and fish, the Kasa and Kin menu prides itself on “the best Filipino barbecue sticks you’ll find outside of Manila.”

There are also plenty of vegan and vegetarian options, including a fresh-tasting avocado and jackfruit spring roll, warming vegetable broth, succulent grilled vegetables served on barbecue sticks, and more.

Kasa and Kin infuse Filipino ingredients with a long list of spirits, syrups and juices to deliver unique versions of classic cocktails.

Perhaps the most unusual flavor is ube, a purple yam used for desserts and cocktails, mixed with vodka, Malibu, coconut cream and cranberry juice.

The ube martini is smooth, creamy and earthy in taste.

Joseph’s favorite dishes on the menu are the three broths, including chicken, beef, jackfruit and vegetables.

He said, â€œOur broths remind me of my home in the tropics. They are so heartwarming on cold London days with a hot pandesal (Filipino buns).

“It’s come a long way and reminds me of my grandmother’s hugs!” “

An explosion of flavors is accompanied by a colorful interior. An interactive mural by Filipino artist Kulay Labitigan depicts a tropical rainforest inspired by an epic poem about the most legendary of Filipino mythical birds.

Filipino cuisine is a fiesta of different cuisines from around the world. The traditional dishes of the different ethnolinguistic groups in the Philippines have historically been influenced by Spanish, Japanese, Indian and Chinese culture, resulting in a varied cuisine taking the best elements from all over the world.