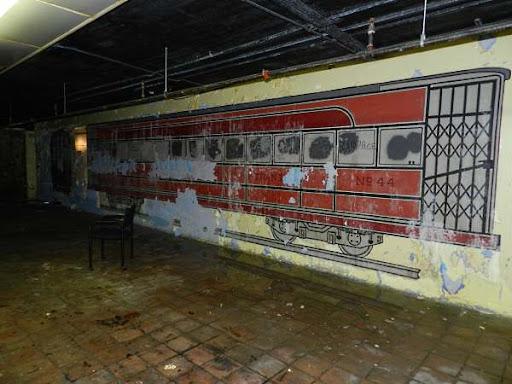 An abandoned series of underground music clubs where rock n ‘roll legends once played, sealed decades ago and hidden under a modern, bustling mall in a big city.

Doesn’t that sound like something you would read in an adventure novel?

What about a “big hole” in rural North Carolina, with a secret underground facility that locals say contains military weapons or alien encounters?

An author from Raleigh has combined some of the Triangle region’s lost stories and most compelling urban legends in a recently published book titled “The Joint, The Hole and The Subway”.

Through his book, Matthew House hopes to allow locals to vicariously explore some of the mysteries of the Triangle region in a fictional setting.

â€œIt’s kind of like the town of Hawkins in Stranger Things is a fantastic reflection of Durham,â€ said House, whose book will investigate a fantasy version of the Triangle, based on real locations.

The Village Subway: a secret piece of underground music history

House was originally inspired by the history of the village metro.

The Village Subway, a lost 1970s music scene sealed under the Village District of Raleigh, was a cultural phenomenon.

â€œIt’s hard to believe that music legends like The Ramones, Pat Benatar, Iggy Pop and Bette Midler have performed on the streets of downtown Raleigh before,â€ House said. â€œHow could we have lost such an important piece of North Carolina musical history? “

Not only did these legends, and dozens of others, perform in the small smoky run of clubs under the streets – that’s actually where many of them got their start.

Almost 50 years later, the story of the Subway Village is still a viral topic in many online forums – the younger generations yearn to see and explore the mysterious underground music scene, and the older generations recounting the magical nights that ‘they passed in the metro.

Like many people, House found himself wishing he could explore the subway.

He joined a group called The Pier in the Cameron Village subway in Raleigh, where many people share memories and photos from the heyday of the subway.

â€œTheir stories and memories gave me context for the book as I wrote it,â€ House said. In particular, he learned a lot from Fred Decker, the former owner of Battle Stations, a popular arcade that was part of the Village Subway.

He researched the history of the Village Subway, looked at old photos and maps of underground clubs. He even created a playlist of music from bands like X-Teens, Iggy Pop, Flock of Seagulls, REM, who played regularly in the subway. Listening to music, he said, would help put him in the right frame of mind to write about the period.

Explore the lost history and urban legends of the Triangle region

The book’s protagonist, whose mother works at The Frog & Nightgown, a popular jazz club that anchored the Metro during its early years, takes the reader on an exploration of some of the Triangle’s greatest mysteries.

House hopes his book will allow readers to “explore” places like the village subway, the big hole, and the legendary CIA substation under 401 Oberlin.

For readers who spent their youth in the clubs under the village metro, he hopes the book will bring back memories. The story will take readers from club to club, visiting places like The Pier, The Frog & Nightgown, The Bear’s Den and Battle Stations.

â€œObviously, things are very fictional. This is not a history book,â€ he said. “But I hope it evokes a bit of nostalgia.”

House’s book is on sale now.