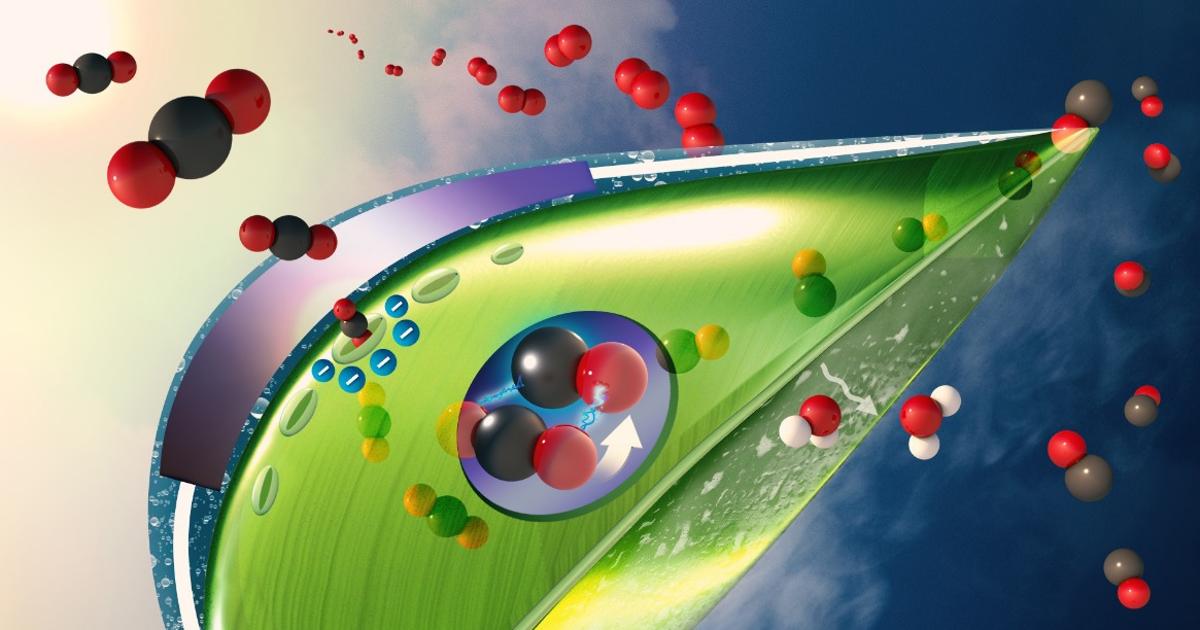 Recreating the natural photosynthesis process in which plants convert sunlight, water and carbon dioxide into energy has been a longstanding scientific goal. Often referred to as “artificial leaves”, these systems could play a key role in the fight against climate change, and a team of engineers has just picked up the pace with a solution that captures carbon dioxide at 100 times the pace of technologies current.

We have reviewed a number of artificial leaf systems over the years that use sunlight to turn water into liquid fuels and electricity. An interesting example came from engineers at the University of Illinois at Chicago (UIC) in 2019. It had a unique design that the creators said made it suitable for real-world use, unlike other laboratory solutions that could only work with carbon dioxide from pressurized tanks. .

The solution consisted of a standard artificial photosynthesis unit which was enclosed in a transparent capsule filled with water and had a semi-permeable outer layer. When sunlight hit the device, water evaporated through the pores of the outer layer and carbon dioxide was sucked in to replace it, where the unit inside transformed it in carbon monoxide. This CO could in turn be captured and used to make synthetic fuels.

With a few key design tweaks, scientists have now taken its performance to new heights. The team used inexpensive materials to embed an electrically charged membrane that acts like a water gradient, with both a dry side and a wet side. On the dry side, an organic solvent attaches to the captured carbon dioxide and turns it into concentrated bicarbonate, which accumulates on the membrane.

A positively charged electrode on the wet side then draws the bicarbonate through the membrane and into the aqueous solution, where it is converted back to carbon dioxide to make fuels or in other applications. Changing the electrical charge can speed up or slow down the rate of carbon capture, which the scientist found at its optimum can capture 3.3 millimoles per hour for every four square centimeters (0.6 square inches) of material.

This “throughput” is described as very high, and more than 100 times better than existing systems. Crucially, only a negligible amount of energy was needed to power the reactions, at 0.4 kilojoules per hour, less than it takes to run a one-watt LED bulb. Equally impressive, the team says the system can capture carbon dioxide for $145 a ton, which is in line with Department of Energy guidelines that such technologies should cost $200 a ton or less.

“Our artificial leaf system can be deployed outside of the laboratory, where it has the potential to play an important role in reducing greenhouse gases in the atmosphere through its high carbon capture rate, relatively low cost low and its energy moderate, even compared to the best laboratory systems,” said Meenesh Singh, assistant professor of chemical engineering at the UIC College of Engineering and corresponding author of the paper.

The device is small enough to fit in a backpack and is modular in nature, meaning multiple units can potentially be stacked on top of each other to create devices to suit different settings.

“It is particularly exciting that this real-world application of an electrodialysis-driven artificial sheet has high flux with a small modular surface,” Singh said. “This means it has the potential to be stackable, modules can be added or subtracted to best suit needs and be used more cost-effectively in homes and classrooms, not just among profitable industrial organizations. small module the size of a household humidifier can remove more than 1 kg (2.2 lb) of CO2 per day, and four industrial electrodialysis chimneys can capture more than 300 kg (300 lb) of CO2 per hour from combustion gases.

The research was published in the journal Energy and Environmental Sciences.

Source: University of Illinois at Chicago