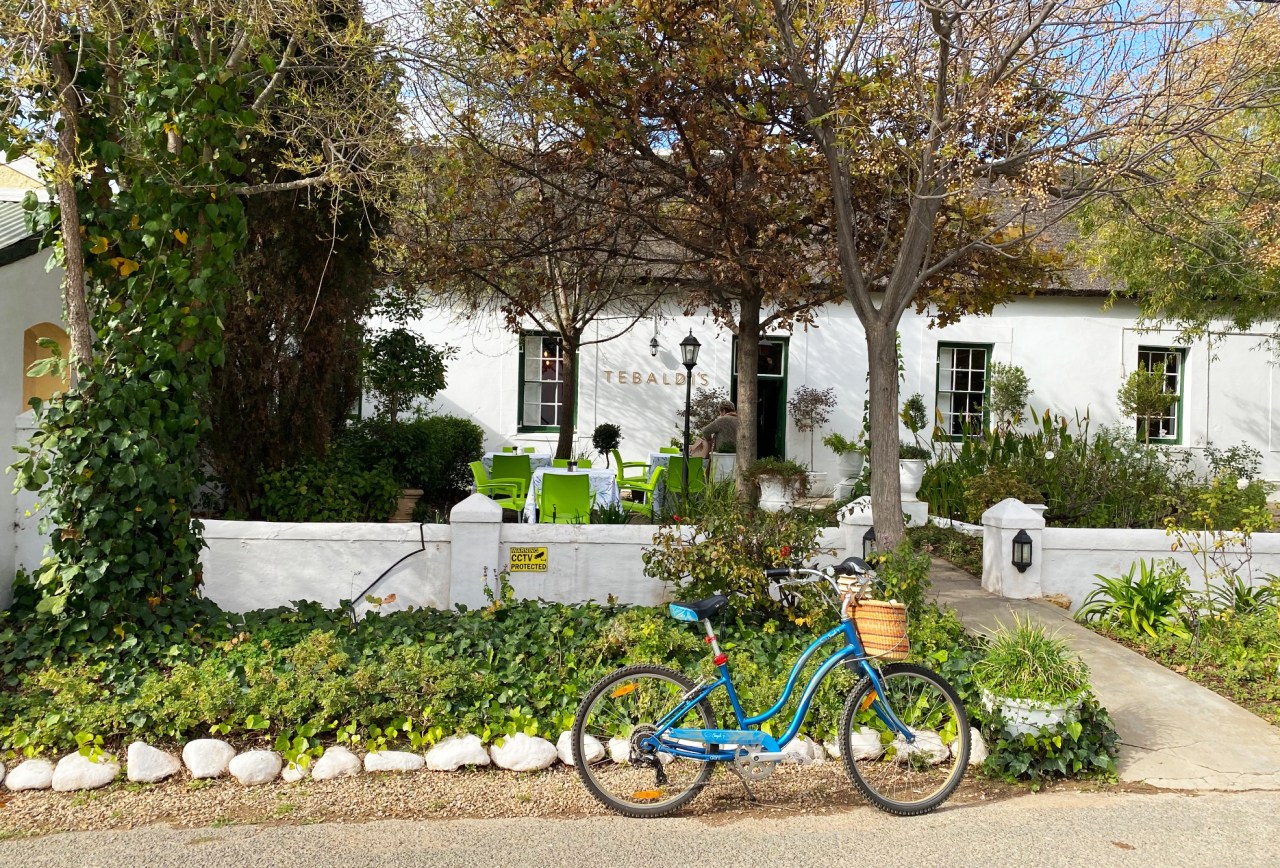 Four days and three nights at McGregor pushed me to my dietary limits, and I haven’t even been anywhere I would have liked to go. Mind you, if I had stayed longer I would have eaten more of these grilled three cheese sandwiches from Out Of Africa than is decent.

There’s exciting and interesting things happening on the culinary scene in this quiet (for the most part) little dorpie, with TV shows and big-name chefs breathing new life into previously rather dated places. Bertus Basson moved on with Misi Overturf in February to renovate the Green Gables restaurant for the show’s second season In Die Sop; and Christiaan Campbell of Delaire Graff and Boschendal fame revamped Tebaldi’s at Temenos Retreat and added a light cafe called Out Of Africa which is a popular place for villagers and visitors to meet and relax.

I love the old McGregor houses, one of which, with its thatched roof and kitchen chimney, belongs to my friend Liewe Liny, with whom I spent the first two nights. “There’s a present in your room from The Blend and Bemind,” she told me, as I renewed my acquaintance with her cute earless cat Elizabeth and met the “new” dog Gracie Meisie.

The Blend is a café, delicatessen and wine shop, and Bemind is a garage winery owned by winemaker Ilse Schutte. With the bottle of Cinsault on the buffet, a jar of grape jam and a big chocolate brownie topped with lightly salted nuts.

Liewe Liny and I debated endlessly where to have breakfast: 51 is an option and often busy. Out Of Africa offers all-day breakfast and the aforementioned grilled cheese (along with other sandwiches), but it was The Blend, owned by Benita Gouws and Chantal Dunlop, that ultimately won. I walked the block and a half for scrambled eggs on toast and an open sarmie with ham, cheese, tomato and pesto. Plus two mini quiches because they looked so good. A cappuccino of course, and a pot of smoked bacon and tomato chutney, two chocolate bars with a nice quirky wrapper, a giant leek for Liewe Liny’s soup, and a book from the exchange for which I donated $50 to the animal charity since I had nothing to trade.

Christiaan Campbell’s story is much like many McGregor tales, intertwining and overlapping. The owner of Temenos – a gorgeous retreat with gardens to wander around and peacocks to admire – is Billy Kennedy. Campbell was very familiar with Kennedy’s partner, Michael Pettit, in the hospitality industry. Sadly, Pettit passed away in 2021 and Kennedy decided that after the horrific two years, it was time to change and update the restaurant, Tebaldi’s.

Besides being a chef, Campbell has a business called Living exchanges which “brings people together by developing an understanding of complexity so that people, communities, businesses and the environment can thrive together in a regenerative ecosystem”. Campbell said he would have come to McGregor to see what he needed and to find it for Kennedy through live trades. Returning a second time, Campbell and his wife Moya looked at each other and agreed that they had to be on board.

“So we offered our services,” said Campbell, who plans to be there for the foreseeable future. “My life seems to go in five-year cycles.”

Out Of Africa, which includes tables in the lush garden with a tinkling water feature, a small interior with a fireplace and five other tables, and a kitchen “the size of a broom closet”, and a counter with high stools, serves pastas of the day, salads, sausages, breakfasts and sandwiches. I had sausages on this first visit, but couldn’t forget the sandwiches; Campbell talked about them a lot. Came back on Sunday morning for the three cheeses and tomato on ciabatta. Campbell uses La Mont-Montaan cheese (pizza cheese), Royal Ashton (sweet and nutty) and Maasdam, a Swiss-type cheese. The combination is a gooey, stretchy indulgence of deliciousness. Undoubtedly a highlight of this trip, quite an observation considering all the other feedings.

The Tebaldi’s new look is unrecognizable. We had lunch in the garden room which in summer will open its glass doors to the outside and the resident peacocks. The cat, Lulu, allows belly rubs.

Open just over a month, Campbell describes the food as contemporary country cuisine. With dishes like hot salmon trout and leek cannelloni with lemon and dill cream, mead-glazed chicken breast and chicken confit with artichoke, and salted hake with mussels, potatoes earth with smoked cream and onion fritters, it’s chic for a village but not too fancy.

“We’re not trying to exaggerate anything,” Campbell said. “What we produce is what we can while maintaining the quality of life, the quality of food and giving it the attention it needs to achieve that balance.”

In the kitchen with Campbell are assistants Luqhman Cloete and Iveline Jacobs, from Bonnievale, who had never cooked before being employed here. At 20, Campbell says she’s amazing, with a natural gift for recreating the dishes she’s been shown, and even improving on them. “I wanted to employ locals, and I prefer to train someone who has never been trained before, who has enthusiasm and the will. So I took a gamble,” Campbell said. “I will do more of this. I put my intention there. Which is a very McGregor thing to do.

“My role here with Billy is to really align with the spirit of Temenos, from the integrity of the ingredients to the way the team is treated. There’s no point in being all spiritual on one side so may all hell break loose on the other,” he continued, in keeping with the philosophy of Living Exchanges.

Hosted by Bertus Basson, the kykNET series In Die Sop find restaurants that desperately need help. The goal is to give them that in 72 hours, from decor to menu. Which brings us to Green Gables, a farm at the far end of McGregor before taking the 10km dirt road to Lords Winery (worth the trip but the suspension is tough). It is owned by Sarel van der Westhuizen, a widower with two daughters.

For background, the episode is available to watch on DStv Now until August 17, 2022. It’s touching and heartwarming, and the result is Frida’s, a tapas restaurant. Green Gables remains a four-bedroom bed and breakfast (five in spades), where I spent my third night, in a room that was once a barn to store flour for the old mill behind it.

“The whole experience of In Die Sop was amazing,” Van der Westhuizen said. “Whatever came out of it, it was so cool. There were like 40 or 50 people here, it was chaos but so much fun!

It’s easy to get stuck in a rut and not be able to see your way, so fresh eyes and ideas may be just the boost you need, which happened to Frida. There was one major change that Van der Westhuizen struggled with – moving the bar – but he’s happy with it now. There’s a flow from the front door to this bar, where the wines are on display, and to the outdoor space, a hitherto unused asset. The front step has a panoramic view of McGregor, but it’s hellishly hot in the summer, until sunset, where it’s just perfect.

“You get ideas and opportunities that you may have thought about but didn’t pursue,” Van der Westhuizen said. The experience provided momentum and inspiration.

Last weekend, Van der Westhuizen had decided to introduce an Indian menu, unfazed by the fact that he hadn’t cooked Indian dishes on this scale before. “The Indian menu is no fun. There’s a lot of prep work,” he said, as indicated by his flour-covered hands while making the naan bread. This is the first major change since In Die Sop, and it’s a pretty good effort. I had dahl, butter chicken, and naan, and Van der Westhuizen sent some sides. I told him he could bottle that zucchini pickle right there and I’d buy a jar.

On the way back to Cape Town, I stopped at Rooiberg Winery, a Robertson landmark for the giant red chair that gives the bistro its name. This bistro is now in the hands of MasterChef AG Season four runner-up Andriette de la Harpe and her partner Janelie Kruger. This is the newest of all the places I’ve been to, having opened under their management on July 1st.

De La Harpe, a bubbly extrovert who greeted me with a warm hug even though we had never met before, and Kruger lived, worked and holed up together during Covid. De La Harpe opened a bakery called n Mondvol and entered Chefnot for a moment thinking that she would pass the auditions.

“We joked, we knew she would be there for at least a week,” Kruger said.

“I’m not emotional, but it was all a godsend,” De La Harpe said. “It was such a growing moment. I really didn’t believe in myself. At all. I was continually struggling with impostor syndrome; I didn’t feel good enough and didn’t deserve to be the.

The moment she reached the top 10, De La Harpe decided it was time to stop thinking she was taking someone else’s place. “I had to push myself and own myself,” she said.

Next ChefDe La Harpe and Kruger talked about a shared dream of having their own dining space, and De La Harpe mentioned it in an interview she did on Cheer on kykNET. The next thing she knew, Marianne Lochner of Rooiberg reached out and offered her the opportunity to take over the bistro, a deal which De La Harpe accepted on the condition that he included Kruger. Their vision is of a place where customers can get their fill of great food in generous portions.

“Although I dreamed of having a space, it wasn’t necessarily a vision of being in the kitchen,” De La Harpe said. “I never wanted to be a chef. I wanted a space where people could come and have fun, rejoice and eat well. And if not now, when.

Before leaving, De La Harpe put three of his Lindt brownies in a paper bag for me. Dusted with gold, pale and cracked on top, and soft and rubbery underneath, I flouted them all. Easily another highlight of a fulfilling – and fulfilling – road trip. DM/TGIFood