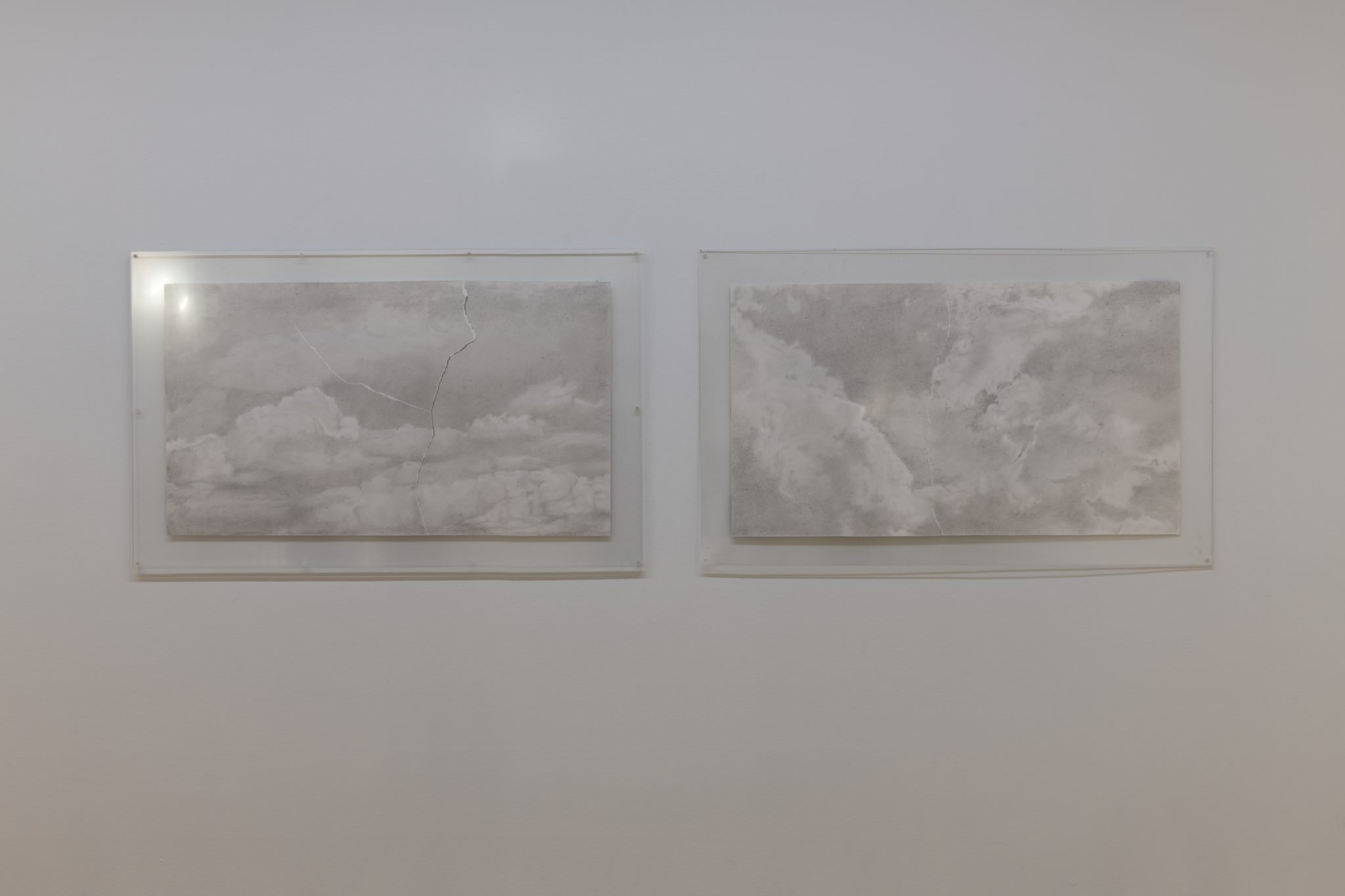 Love Hurts: A Consideration of the Life and Chicago Works of Gregory Bae at the Museum of Contemporary Art, Chicago

White, puffy clouds roll and swirl against a brilliant blue sky at the opening of the 1993 film “Groundhog Day” – a brewing storm, perhaps. The swirling staging foreshadows supernatural conditions to come in the classic rom-com and sets the stage for ‘Chicago Works: Gregory Bae’ at Chicago’s Museum of Contemporary Art, in a pair of delicate pencil renderings. In the film, the cloudy sky gives way to the protagonist, Phil Connors, delivering a deadpan weather report before becoming trapped in an endlessly repeating day. Faced with an eternity to himself, Phil becomes obsessed with winning the affections of his weather show producer, Rita. In what is widely cited as one of the most philosophical and witty endings to a popular American film, Phil irresistibly confesses his love: “No matter what happens tomorrow, or for the rest of my life, I am happy now because I love you.” The seething clouds reappear as Phil is freed from his personal hell in a world where time moves on forever.

To love, argues “Groundhog Day”, is to give oneself over and over again to the ceaseless shuffling of the world, to live without possession or promise – “to love life is to love the fact that it goes”, according to the National Review editor Richard Brookhiser. This heartbreaking theme is the basis of the exhibition, thanks in part to Bae’s “Black Hole of Love” (2016) drawings, laying out the film’s opening and closing scenes on large sheets of paper separated by tears. capillaries and held together by clear acrylic sheets.

The drawings, titled for an English translation of the film’s Korean title, reflect Bae’s sustained interest in time, love, and loss, metaphysically and through his experience as a first-generation Korean American. Reading “Black Hole of Love” autobiographically is no exaggeration – born in Salt Lake City, Utah on Groundhog Day, February 2, 1986, Bae often traveled between the United States and South Korea, adopting the themes of distance, separation and the complex negotiations of identity and nationality in her work. In “Black Hole of Love”, the translation is adopted as a clue to the pain and breakdown of communication across space and time – the meaning of “Groundhog Day’s” message of hope becomes something more sinister and menacing. A crack, embodied in the physical tears through the drawings, appears in the shimmering moral of the film, the enduring love becoming less heroic than futile, sucked into the voracious “black hole” of time. Bae sees this neat American parable fall apart, capturing a freeze frame of a world where love is only allowed to exist when it already incorporates its own loss. A world that consumes love, darkly, leaving few opportunities for a different future.

Nolan Jimbo, who organized the presentation of Bae’s works at the MCA, clearly sees a similar theme in “24-7, 365 (#5)” (2017). The sculpture consists of a Goodyear tire rolling endlessly on a slow treadmill, painted with fuzzy bands of red, yellow and blue, reminiscent of the sam taegeuk, a variation of the symbol on the South Korean flag. Jimbo sees sculpture as a scene of failure: failing to represent, failing to move forward, failing to achieve. This failure, writes Jimbo, is a corollary of the American imaginary of Asian immigrants as “hyper-productive, undifferentiated, and barely visible sources of labor” driven by ever-quickening expectations.

The apparent pessimism of “24-7, 365 (#5)” (2017) is joined, curiously, by an intense and fantastical optimism described in a memoir published by Newcity shortly after the artist’s death in 2020. Friends describe Bae and her work as unwaveringly romantic and hopeful, embracing the erasure of love not as a dark, never-ending drudgery, but as a promise made over and over again to meet the world. Poet Jean Yoon reflects that Bae’s work “felt like a set of coded instructions on how to finally put my heart back together and get back into the world to tell the tale”. “24-7, 365”, notes writer Erin Toale, resulted in “at least one marriage”, an effect Bae considered “a personal achievement”.

Combining an eye toward perpetual failure with bittersweet affirmation and the realization of love through loss is what makes Bae’s work feel so unusual and uniquely piercing. “All Will Be Mine” (2015) is another love letter to loss. A pair of atomic clocks are installed facing each other on opposite walls with preparatory sketches. The clocks are made up of round glass engraved with raindrops suspended mid-drop, on which thin, pale second hands are held at noon by a stack of magnets the size of a watch battery. As the hands try to move forward, the magnets pull them home, causing an amazingly human thrill. Time is held in a nervous standstill, a tragic dance directly reminiscent of Felix Gonzales-Torres’ “Untitled (Perfect Lovers)” (1991), a set of two wall clocks installed side by side and allowed to flow together into the future, while slowly getting out of sync.

Gonzales-Torres’ clocks reflect the physical asynchrony of two lovers dedicated to an offbeat life, at the mercy of a time made fleeting and precarious during the AIDS epidemic. The tragedy of “All Shall Be Mine,” on the other hand, is not that the two clocks might fall out of sync, but that they are doomed to be frozen together. The attempt to stop time, to avoid the eventual digression of the two bodies, produces the zombie tic that warns that the anticipation of failure also prevents life. Bae suggests instead that we willingly offer our love to the black hole, and that the object finds fulfillment in its own loss, not in its preservation.

In this vein, “Ex Radios” (2019) and “Shadows of Thought (Mango Coconut Island, Butterscotch and Fresh Linen over Seojin circa 2014 – 2016)” (2019) by Bae offer gutted and separated familiar objects, order and coherence giving way to absence and chaos. “Ex Radios” is a pasted scroll of practical manuals for assembling objects with which the artist “had a strong relationship” but without language or instruction. The remaining voids are arranged in a lively symphony resembling a complicated score or an incredibly dense urban map and, at times, monochrome constructivism. “Shadows of Thought” is more playful and childish, a discarded electronic screen gummed up with layers of caramel candies, a popsicle stick and bits of wrapper and yarn – a victim, perhaps, of a thousand years on the floor of a beloved minibus.

The two works of art, once useful and rational objects at the end of their useful capacity, inspire a kind of admiration, like Rembrandt’s anatomy students marveling at the complex system of veins and muscles inside the human body. The separation of these objects, in one case careful and systematic, and in the other seemingly haphazard, seems to commemorate the importance and significance the objects once carried, while giving equal respect to their dissolution. Feminist theorist Luce Irigaray writes about this encounter between the entropy of the world and the transcendence of love as a space of “wonder”, which is “only possible when one is faithful to the perpetual newness of oneself , on the other, of the world. Faithful to becoming… the passion for the encounter between the most material and the most metaphysical… between the mortal and the immortal. The meaning of love is fulfilled in the inability of the body and its passions to withstand the test of time, the wonder of the ephemeral and the fragile.

“Chicago Works: Gregory Bae” is a powerful testament to Bae’s wonder at the intersection of life and love – an invitation to turn towards, rather than away from, pleasure and pain. endings that make beginnings so worthwhile. In this way, Bae provides a life plan, sensitive to the time we have and refusing to turn away from each breaking day. (Emeline Boehringer)

GBP/USD rises towards 1.1700 on new optimism infused by UK leaders, US GDP looks on