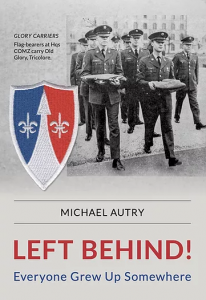 Michael Autry, a northern Kentucky author and former Newport police officer, understands the struggles for students during the pandemic. Autry writes about his own experience struggling in school with undiagnosed Attention Deficit Hyperactivity Disorder in his early memoir, Left over !

Born and raised in Dayton, Autry dropped out of Dayton High School at the age of 16 and joined the military. He was stationed in France and the UK. He worked in retail management, as a police officer and as a skilled worker at General Electric Aircraft Engines in Evendale.

“During this pandemic, I hear so much about children being left behind right now – held back for a year of school because they haven’t had the opportunity to be in class, without it being theirs. fault, ”Autry said. “It all brings back so many memories to me, of how I was in school and how I lost a grade in school, it’s not a good thing for a person. It really puts you back mentally.

Autry describes his book as “the true story of a young boy who, through relentless determination, matured native intelligence, and a little luck, overcomes the circumstances of his childhood in a troubled and rusty town.”

“While writing my memoirs I tried to give my readers a real sense of what it was like to be left for me as a child, young boy and into adulthood – y including my military experience and returning home after joining the military. , Autry said.

When Autry was in school he said he had never been a disruptive student. In most cases, he said he was trying to learn the best he could. When he tried to take notes, he said that it was difficult to concentrate on the classroom material at the same time.

“Towards the end of the year, when the report cards came out, that’s when I realized that other kids were being promoted to the next grade and I was being left behind,” Autry said.

Autry said being held back at school negatively impacted his life, but he was still able to do well later. Nowadays, he is a strong advocate of social advancement and support at school.

In his memoirs, Autry also writes about his service in the military and as a Newport Police Officer. Autry enlisted in the United States Army in 1966 and was stationed in France where he served in the 15th Military Police Detachment as a Serious Incident Reporting Clerk.

When Autry returned to civilian life, he was working at a grocery store where he walked past the Newport Police Department every night. One day he walked in and asked if they were hiring. Autry wanted to use his military experience to serve as a police officer.

“It was a wonderful time to be a police officer in the United States,” Autry said. “We were able to help people in a way that they cannot do today.”

Autry said he wrote this book so his grandchildren can learn more about his life when they are old enough to read it.

“They can look back at old photos of their grandfather; I won’t be here, of course, ”Autry said. “But hopefully that book will still be here. They can read and say “that was my grandfather”. This is what he did, how he must have lived.

Left over ! : Everyone grew up somewhere is sold at www.mikeautrybooks.com

Author Michael Autry will be selling his memoir in person on October 9 at the Dayton High School All-Inclusive Reunion at 200 Greendevil Ln, Dayton.