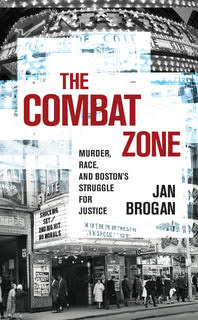 “The Combat Zone: Murder, Race, and Boston’s Struggle for Justice” tells the story of the 1976 murder of Boston native and Harvard football player Andrew Puopolo.

“The book is really about how [the murder of Puopolo] changed Boston, started the movement to shut down the combat zone, and how it changed criminal justice,” said author Jan Brogan.

Brogan, originally from Boston, is a journalist and author whose work has appeared in The Boston Globe, Boston magazine, Ladies’ Home Journaland Forbes.

Puopolo was stabbed and killed while he and his Harvard teammates were in downtown Boston for a season-ending celebration. The three men involved in the stabbings were black and 11 of the 12 jurors were white. Those involved appealed their first-degree murder convictions in part on the grounds that the prosecution used peremptory challenges to exclude black people from the jury. Two of the three men were found not guilty at their retrial, while the third was found guilty of manslaughter and sentenced to 20 years in prison. At the time, the case was featured in hundreds of newspapers across the country.

“This case was used as one of two that set the precedent to change [the practice of excluding jurors based on the color of their skin] in Boston and nationally,” Brogan said.

Brogan makes four stops while touring the Boston area for the book, giving talks focusing on the case, the city’s history, and how Puopolo’s family dealt with their loss.

Brogan’s lectures are open to everyone, including those who haven’t read the book.

“Most people say the book really gave them a broader perspective on what the city was going through at the time and how it evolved,” she said.

Brogan will be in the following Massachusetts libraries this fall:

“The Combat Zone: Murder, Race, and Boston’s Struggle for Justice” was nominated for the Agathe Prize 2021 for the best non-fiction and the 2022 Anthony Award for best critical or non-fiction work.

The best events in town, delivered to your inbox