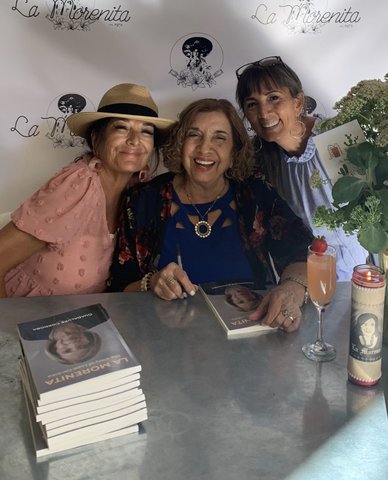 It has been 50 years since Guadalupe Cordoba, a resident of Turlock, came from Mexico to the Central Valley and changed the region’s cuisine for the better – a journey she recalls in her book “La Morenita: The Story of Lupe Cordoba ”, which tells the story of his rise. from childhood life in a small town south of the border to a nationally renowned restaurateur in America.

Originally published in 1999, an updated version of “La Morenita” was released earlier this year, providing new context that had been “lost in translation” in the previous edition, the Cordoba’s daughter, Gloria Smallwood. Also included are new and updated photos, including the beautiful portrait of the author that now adorns the cover of the book.

Despite adversity after adversity, “La Morenita” tells of how Cordoba persevered in the collapse of her marriage after reaching America with three young children. From sleeping in his car to possibly opening his own restaurant and preparing appetizers for a former president, Cordoba draws on these events to offer advice to readers and encourage them in their quest for success.

“I didn’t write the story of my life to make money, I did it because I want people to see the story and do something with their lives,” Cordoba said. “Never, ever give up.”

The Turlock community came together to support the new edition during a signing session at La Mo Cafe on September 18, where all 100 copies ordered for the event were signed by Cordoba and purchased by satisfied customers. Cordoba was moved by the outpouring of support, Smallwood said.

“A client, I will never forget. She was crying because she was with us when we opened the restaurant in 1972 and she always comes to our restaurant, ”Smallwood said. “She said it wasn’t just about the food, but the whole concept of our hospitality and how we serve the community. I will never forget him.

Cordoba “has no words” to express the gratitude she feels when she thinks about how her family took over the business, which began with the first La Morenita in Turlock 50 years ago. Smallwood expanded this original business with La Mo Cafe, with her daughter Hillary Smith in downtown Turlock, and Cordoba’s other daughter, Mary Delgado, owns and operates all of the El Jardin restaurants.

In total, Cordoba’s influence on family members and former employees that she herself trained has enabled more than 50 restaurants statewide to prepare her recipes to date.

“You can really see the fruits of her labor here and all the people she has inspired to go out and make a living for their families,” Smallwood said.

“I think I have the American dream,” Cordoba said.

As Cordoba’s legacy continues through her family, including her children and grandchildren, those curious about how to get there can purchase “La Morenita: The Story of Lupe Cordoba” on Amazon , at Barnes and Noble or in downtown Turlock at La Mo Cafe.