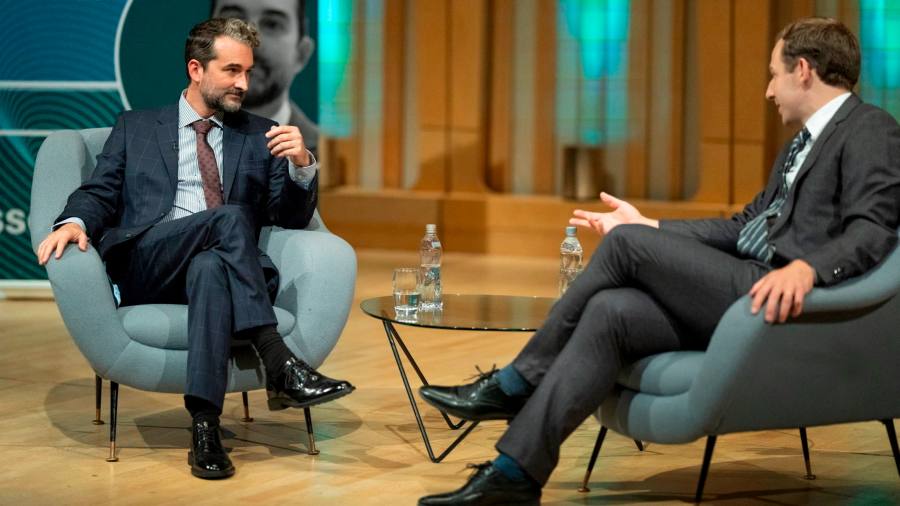 I had just given an unforgettable talk at a book festival (think a small crowd, then cut it in half) when I received the most surreal offer of my professional life. It came in the form of a Twitter message from one of the creators of the HBO/BBC show Industry. “A little weird,” he wrote, “but would you be open to being in Season 2 at all, essentially playing yourself?” And so that’s the brief story of how I ended up with a small role in the golden age of television.

Believe me, I had a lot of thoughts about what to do in my career. Appearing in a prime-time drama had never come. I am not a good actor. My previous theatrical highlight was having a jug of water thrown at me in an elementary school production of Bugsy Malone (and even then the water somehow ran out).

In contrast, Industry, which focuses on trainee bankers living in London, is good TV. The creators, Mickey Down and Konrad Kay, had channeled their failed City careers into a show whose first series was funny, gripping and believable. Their search for authenticity, which I talked about for the FT, is the reason they thought of me for the second series. “We wanted to give the whole thing some reality,” Down said.

It wasn’t until they offered me a contract that I was sure it wasn’t a joke. I was also reassured that it didn’t specify any nudity

This is also what appealed to me, because most portrayals of journalists on television are ridiculous. My scarecrow is when a fictional journalist accuses a politician of corruption at a press conference, and the whole scene falls into an uproar. In real life, such a direct question would be easy for any politician to crush. The press conference will emit a collective yawn. Yes, I had sometimes thought that I could do better. Now I had a chance to prove it.

I guess I remembered, too, the stories of amateurs who became surprise stars playing themselves. Felicia “Snoop” Pearson, a convicted murderer in Baltimore, has been cast as Thread after one of the actors spotted her at a bar. Phyllis Smith is one of the great characters in the American version of Office, but was only scouted for the role because she worked for the show’s casting director (“I was probably honing a craft that I didn’t know I was honing,” Smith explained, who didn’t give up his day job at first). Even if not everyone has a novel per se, surely everyone has the ability to act on their own?

My excitement was tempered, however, when the creators asked me to record a brief video of myself reading a scene. I expected to fall in front of this obstacle. A friend who works in TV gave me advice: “Don’t try to act. It turned out to be invaluable. I fumbled with my iPhone and desperately tried not to act.

Not taking action is harder than it looks. It’s like when someone tells you to act normal – what’s normal? My scene had me interviewing a fictional titan of finance on stage. I do similar things in my daily work at the FT. But it’s one thing to be yourself, using words you’ve come up with, and it’s another thing to be yourself, using words that (great) screenwriters have. imagined for yourself. The script read, “Don’t you worry about reputational risk? People who slander? I don’t think I had ever used the word “sprinkling”. Even “Snoop” Pearson was informed by Thread creator David Simon to improvise as little as possible.

Let’s say that recording the clip took me several times. Rejection seemed certain. But no, HBO approved me. The casting agents asked me if I had a theatrical agent (obviously not). It wasn’t until they offered me a contract involving real money and a union deal that I was convinced it wasn’t a joke. I was also reassured that the contract specified: “Nudity/Simulated Sex: No”.

It was the Covid-infused summer of 2021, so the producers sent a car to take me from London to Cardiff, where Industry is filmed, despite my protests that I could take the train. This is pretty much the opposite approach to travel costs to that taken by the FT. Soon I was shown to my trailer and offered free food. In short, I had talent, even if I only had two lines.

I’m sure the glamor fades quickly. They say your first day on set is the most exciting day of your life and your second day on set is the most boring. One of the reasons the production offers to drive you everywhere is that they can control where you are. (Director Danny Boyle apparently prefers to move around on set for this reason.) And my trailer was really a third of a truck, with an uncomfortable couch from which you couldn’t see the TV. And the bathroom seemed big enough for a child actor. There’s also a lot of hanging out on set.

But for me, it was dreamland. When trying on the costumes, I tried on more costumes than for my wedding. Never before has my appearance seemed so important to someone else, and never again. There was an awkward moment in the Green Room, when two actors—not knowing I was a reporter—discussed how much they disliked doing publicity interviews. “I can’t just say, read the Internet?!” one says. A part of me died as I remembered how many hours I had spent researching and writing celebrity interviews.

My scene was with Jay Duplass, the American actor who embodies the hedge fund titan with delightful humanity

Meanwhile, my TV friend had more advice. “People on set might be pissed off with each other. Impenetrable politics. You are Rosencrantz and Guildenstern,” he wrote, overestimating my understanding of Shakespeare. In fact, the people on set weren’t mad at each other. They were surprisingly nice. When I initially struggled with my lines, the director, Birgitte Stærmose, asked me if I had ever interviewed someone intimidating. (In TV, unlike in movies, the director isn’t the key ego.) I started telling Stærmose about some of my interviews with boxer Tyson Fury and billionaire Richard Desmond, before realizing she wasn’t interested in the details – she was pushing me into the mood of the scene. Because I had a speaking part, I was treated gently, like a beloved pet, while the extras were herded in like cattle. However, they seemed happy.

My scene was with Jay Duplass, the American actor who embodies the titan of hedge funds in Industry with a delicious humanity, inspired by two encounters he had with Jeff Bezos. I loved Duplass in the series Transparent, and here I was just chatting with him between takes. He writes and directs, as well as acts, and has made it clear that acting is definitely the easiest of those jobs. He slid across the stage. I do not have. For starters, I was completely bowled over by how smoothly Duplass spoke – the microphones mean you don’t have to project like you would in the theater, and a lower voice allows for more emotion. My main concern was not to end up like Joey in Friendswhen he’s given a big break as a “double” for Al Pacino, but ends up getting fired for putting too much emotion in his ass.

I was not fired. It seemed to go. . . good? Or good enough to be asked to stay for the next scene. That turned out to mean staying silent for five hours most of the time, but it felt like a privilege. My friend predicted that I would be cut from the filmed version. “You will be asked to re-record your dialogue and it will all be played in the back of your head.”

In fact, a lot of my dialogue was cut out. But I was asked to do another scene in a later episode – as a talking head on a CNN talk show. Again the management was so polite: “I like to smile, but maybe try without.” The key challenge was the cold, shooting in December in a large metal shed. In the seconds between each take and each different camera angle, the crew brought us jackets and hot water bottles. When you see how fragmented the shoot is, it’s even more impressive that the actors manage to stay focused.

There is no comparison between being almost myself and these real actors who not only manage to be someone else, but also expand our understanding of human nature. “On stage, he was natural, simple, touching; “It was just that when he wasn’t there he was playing,” as playwright Oliver Goldsmith wrote of David Garrick.

I appear in episode 8 of Industry season 2, but I know my time as an HBO/BBC actor is over. Never again will anyone ask me to connect them with my theatrical agent, or if I want my coffee brought to my trailer. When it comes to who should play me in the movie of my life, I stick with Chris O’Dowd.