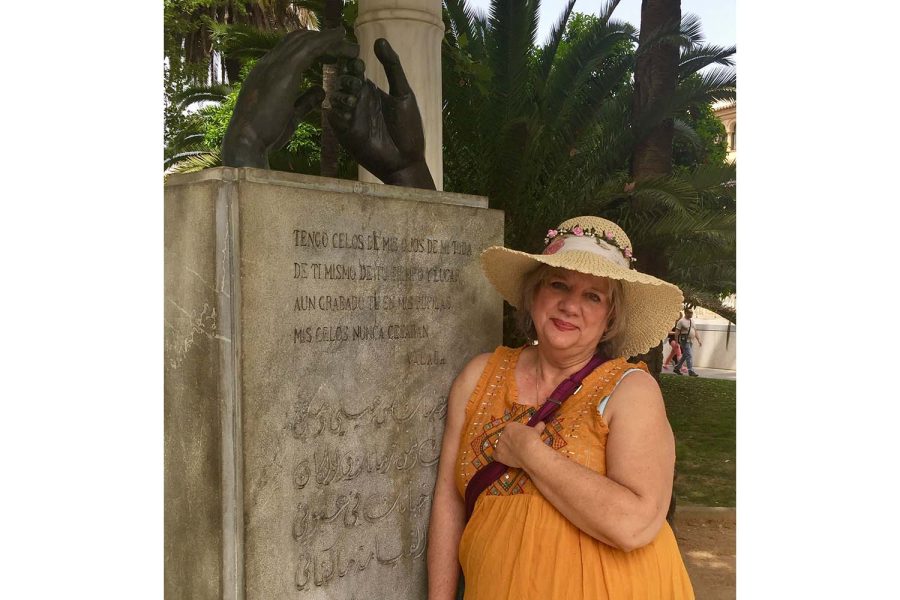 Corinne Stanley, a University of Iowa Spanish graduate and former UI Language and Culture Facilitator, has released her latest book, “La Tercera Luz: A Poetic Journey Through Spain.” The author hosted a launch for the emotion-driven novel on July 21 at MERGE.

Photo courtesy of Corinne Stanley, a writer and educator from Iowa, who hosted a reading of her latest book, “La Tercera Luz: A Poetic Journey Through Spain,” July 21 in MERGE, IC.

Corinne Stanley, writer and educator from Iowa, hosted a reading of her latest book, “La Tercera Luz: A Poetic Journey Through Spain,” on July 21 at MERGE, IC. The room was decorated with bright collages and artwork, as well as many other handmade bric-a-brac – it was animated by people who, as Stanley said, “were meant to be there “.

The author herself was dressed in a flowing silver dress and ushered guests in with open arms and beaming smiles. She urged attendees to walk around the hall and check out the artwork, adding that twenty percent of all revenue from these items would be donated to Ukraine.

Before starting the reading, Stanley talked about the importance of place. As a third-generation immigrant from Spain and a language and culture consultant at the University of Iowa, Stanley said she’s well aware of the challenges of cross-cultural interaction.

“I have taught and worked with many different cultures. I really think Iowa City has offered a lot of insights, especially since I’ve interacted with various cultures over the years,” Stanley said. “Also, you develop an important humility when you live in a place where you are not the dominant culture or class.”

MERGE, she felt, was a place created to facilitate such interactions; it represented Iowa City’s relentless effort to be cosmopolitan. Directing her reading there was Stanley’s way of thanking a community that, as she expressed, had been very supportive of her literary endeavors.

“So many people stepped up to help me organize the event, and that’s why I thought it was a community event. MERGE recognized it and offered me the space,” she said.

Stanley noted that the book itself is the product of his recent trip to Spain in search of his roots, his waning passion for writing, and personal meaning. After enduring a cascade of deep emotional crises, including surviving cancer and the death of her mother, Stanley said she woke up needing to make the trip.

Lea Ramsdale, a close friend of Stanley’s for over twenty years, said she had seen Stanley grow as a writer and said the work was Stanley’s masterpiece. She described “La Tercera Luz” as “a book that has resisted categorization”.

“It’s a memoir, a story, an autobiography, and so many other things, but above all it’s poetry,” Ramsdale said.

Ramsdale felt that in the book’s sensory imagery there is a persistent effort to “dig under the veneer” and bring “the essence of things to light”.

Stanley’s involved and heartfelt reading mesmerized his audience. Stanley chose to display photos from her time in Spain as she read, shrouding the event in an aura of solemnity and sanctity, allowing the public to listen more intently.

Much of the book revolves around Esther Bendala Pavon, a poet Stanley met and developed a strong bond with in Spain. Stanley described Esther as a poet sister because she felt a deep kinship with her.

“Like Esther, I wrote from an early age,” Stanley said. “I had suffered from cancer and had written about it, and later, my heart disease. I could identify with her unique lifestyle and I think that by translating her work, I became very close to her.

Pavon died of brain cancer in September 2018. When Stanley met Pavon, the latter was in her final years. While writing “La Tercera Luz”, Stanley undertook the task of translating and publishing some of the thousands of poems that Pavon had written during his lifetime. Due to Pavon’s importance in the novel and its strong connection to the volume of Pavon’s poetry, Stanley said “La Tercera Luz” developed significance in honoring Pavon’s battle with cancer and to the loss that his death was to the literary community. .

Gabriella Rivera, another close acquaintance of Stanley, highlighted her gratitude to Stanley for sharing the traumatic experience that cancer was in a way that has soothed others who are battling the same disease. Rivera was also touched by the Catholicism that permeates the book.

“As a Catholic, I believe things happen for a reason,” Rivera said, “I have known Corinne for a long time and learned of her interactions with Esther prior to this reading. I am so impressed that this book honors the pain of cancer. I’m so glad the book came out earlier [Esther] deceased.”

Stanley concluded the reading by explaining how universal these experiences from his journey were and how “important it is for writers to get it all out.”

A murmur of approval rose in the room as attendees began to comment on how wonderful the event had been. It was obvious that the event turned out to be epiphanic and cathartic not only for the author, but for everyone present at the reading.

5 of the best contemporary romance books for steamy reads