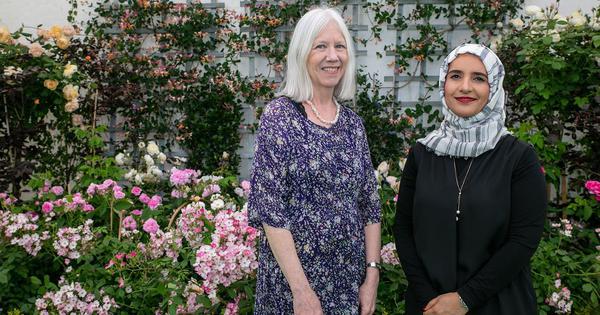 bitter orange is the highly anticipated novel in translation by Jokha Alharthi – published just three years after she and Marilyn Booth won the 2019 International Man Booker Prize for Celestial bodies. Of the three novels she has written, this is the second to be translated into English. Booth’s deft translation elevates Alharthi’s talents as she weaves patterns between past and present, memory and dream, and inhibitions and ambitions. But is good writing (and translation) reason enough to ignore a few damning flaws?

Our narrator, Zuhour, is an Omani student at a British university. Swapping Oman’s hot sun with Britain’s gloom isn’t what she had in mind. Zuhour finds no joy here and is not recovering from the death of his adoptive grandmother, Bint Aamir, who died just days after he left. Unable to overcome her grief, Zuhour fears becoming her mother, who suffered from postnatal depression even long after her children grew up and left the nest.

“At the word depression, the woman I called my grandmother, Bint Aamir, just laughed. Again she told us the story of Athurayyaa’s madness and how she could not bear the sight of her son.

So how do you come to terms with such grief? Zuhour wonders what Bint Aamir’s life would have been like. She re-imagines the events that could have led Bint Aamir, also a distant poor relative, to care for Zuhour’s father and later his children. She remembers her grandmother through certain scents and gestures, and traces her fiery personality back to her childhood when Bint Aamir managed to snub the advances of a rogue trader and saved little money for an unsuccessful trip to another town to see a white doctor in hopes of getting prescription glasses for his bad eye.

But Bint Aamir has not always been a portrait of rebellion. She was kicked out of her father’s house and never lived to see her dream of owning an orchard. In Bint Aamir’s Memories of Oman, Alharthi takes us back to a time when the country witnessed hunger and disease, water was scarce, and people migrated in search of livelihoods wherever they could smell a slight odor of silver.

“Shame! Aren’t you ashamed to eat from your father’s plate? Eat the labor of your own arm!

A web of feminine disappointments

Zuhour is not alone with her memories. She strikes up reluctant friendships with two Pakistani sisters, Suroor and Kuhl. The sisters have not experienced bereavement – ​​they come from wealthy and privileged families and all decisions are made in their name. So much so that the only act of resistance they have ever opposed is to choose to wear the hijab.

Their wealth and small misfortunes melt into Bint Aamir’s memories – it’s a tried and true method of illustrating extremes. Alharthi gets caught in this shot. Suroor and Kuhl are nice additions but they don’t make their mark. Kuhl’s lover (and secret husband), Imran, is a Pakistani peasant who won a scholarship to study at university. He’s not the right man for the wealthy Kuhl, or so Zohour is convinced. There is no basis for his belief, of course, except his vague knowledge of poverty through Bint Aamir.

There are hints of Zohour’s growing affection for Imran but they’re so imperceptible you’re almost convinced they imagined it. This doesn’t bode well – Alharthi dangles a delicious carrot which she snatches as soon as the reader reaches for her. The feeling of incompleteness that arises from this love triangle persists until the end.

bitter orange is a canvas of women’s disappointments. Their grief permeates every word. Besides Bint Aamir’s unfulfilled dreams, there’s also Kuhl’s mother, a woman who never lived up to her theatrical potential and reluctantly slips into the role of her mother; Sumayya, Zuhour’s older sister, who ends her unbearable marriage in a split second of thoughtless maneuvering; and Zohour herself, who we don’t know much about aside from her heartache.

The women of Alharthi bring stories from London, Karachi and Oman – but the thumbnails move so quickly it was hard to sink my teeth into. The men have their fair share of adventures, too – Imran’s memories of his life in a ‘Pakistani outback village’ and Bint Aamir’s distant relative forging through the jungles of the Congo in search of fortune. and excitement. These narratives zigzag through the chapters and instead of blending in, stand out as rough corners. There’s a glimpse of a great story there, but still just as annoyingly out of reach.

I would like to mention here three chapters that I found particularly superb. “A Day Trip”, “Bliss”, and “A Leaf Falling from the Mango Tree” revolve around Zuhuor’s older sister, Sumayya. Nicknamed “dynamo” as a child, she is held in submission by a ruthless husband. Sumayya suffers in silence. One day when fate offers her a fleeting opportunity to break free, she clings to it. This twenty-five-page episode is so poignantly written that it demands a full novel in its own right. In her silences, Sumayya emerges as a more captivating heroine second only to Bint Aamir. Yet this finely written story has no discernible impact on the whole.

As is often the case with grief, there is a sense of claustrophobia that pervades everyone. However, that’s not a bad thing. It’s a reminder of how women go about their lives despite the disappointments inflicted on them at every age. In a moment of terrible realization, Zohour expresses his grief as follows: “His corpse was nothing like him. It sounded a lot like me. That made me stop dead in my tracks, what a singular achievement with language!

bitter orange is not without its share of flaws, not much different from the women who are the driving forces of the novel. It is a deeply human story of deafening failures and silent triumphs. Alharthi creates a world where the future is vague but full of hope, the past is rich with possibility and reconciliation, and the present offers a chance for redemption.

“We had my mother’s fragility and my grandmother’s fierce will; my father bringing us gifts from his travels, and Sufyan’s incredible little bouts of trouble. Everything was ours, and we didn’t doubt it for a moment.