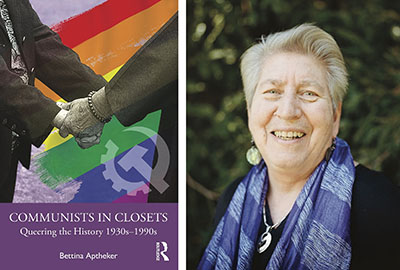 Exploring the complicated history of LGBT people within the Communist Party

Aptheker has developed a large and loyal following over the years. Her introductory Women’s Studies course spanned disciplines and genres to give students an intellectual and mind-expanding experience that has been described as “life-changing” and “mind-expanding.”

Aptheker embodies his credo “the personal is political” in his books as well as his courses, and his latest book, Closed Communists: Queer History from the 1930s to the 1990s (Routledge) is already drawing rave reviews.

On October 25 at 7 p.m., Aptheker will read excerpts from this book at the Cowell Ranch Hay Barn near the base of campus and participate in a discussion focused on his life of adventurous activism. The event is presented by UCSC’s Institute of Humanities and Santa Cruz Bookstore.

The event is free and open to the public, but places are limited, so it is necessary to register in advance. Register here to reserve your spot. Wearing a mask is mandatory for this event.

UCSC Dean of Humanities Jasmine Alinder describes Aptheker as “one of the leading feminist scholars, recognized for building the feminist studies curriculum at UCSC. But she is also an expert storyteller and an excellent communicator who works across disciplines. In her classes, she drew not only on scholarship, but also on art, poetry, videos and music.

“His books, like his courses, testify to the fact that the personal is political,” Alinder said. “In recent years it has become an academic slogan, but Aptheker pioneered this way of thinking. His books are more than simple portraits of historical periods. They also talk about human impact, what it’s like to put your life on the line for what you believe in.

A story of exclusion, challenge and bravery

Aptheker’s book covers the heavy and complex history of LGBT people within the Communist Party, which banned them from membership from 1938, and even dismissed them as “degenerates”. In fact, the policy of exclusion lasted until 1991, when the Party broke up after the collapse of the Soviet Union.

Due to the six-decade-long ban, gays and lesbians who supported the party had to remain in the closet. To contemporary readers, such exclusionary practices may seem surprising, even shocking, given the party’s wave of popularity – it had nearly 100,000 members in the 1930s – and because of its adherence to strongly associated with progressive politics, including anti-racist organizing.

Gays and lesbians were very locked down in general in the 1930s and 1940s, and certainly locked down in the Communist Party for the six decades they were barred from membership, Aptheker said.

But there were significant complications that added depth and nuance to this story. For example, the Communist Party, despite its homophobic stance, had members who were brave enough to stand up for lesbian and gay liberation, challenging the homophobic status quo. In the process, these leaders contributed to the political and philosophical foundations of these movements.

Aptheker also freely drew on his own memories. “Because I myself had been locked in the Communist Party in the 1960s and 1970s, I had some ideas of who and what to look for in my research,” she said.

“A desire for freedom”

The book has just been published, but it is already receiving warm praise from distinguished scholars and authors such as Sarah Schulman, author of Let the Record Show: An ACT UP New York Story, 1987–1993 (2021).

“Bettina Aptheker’s personal story of gays and lesbians and the Communist Party is pivotal and transformative in informing our understanding of visions of gay, black, and women’s liberation in America,” Schulman writes. “She shows how queer desires for freedom were so broad that they were propelled both by the party’s political visions of justice and the cruelties of its organizational biases to create entirely new liberation formations.

“Aptheker traces the invention of Gay Liberation in America, the first women’s studies course, the founding of gay parent solidarity organizations, lesbian music, and the first play by a black woman in Broadway, all from queer communist backgrounds,” Schulman continued. . “This is a book that makes connections and fills gaps, challenges stigma and challenges historical silence.”

Mary Helen Washington, Emeritus Professor of English at the University of Maryland, College Park, and author of The Other Blacklist: The African-American Literary and Cultural Left of the 1950scalled the book “both a deeply personal portrait of Bettina Aptheker and her struggles as a queer woman in the communist movement, but also a generous, grateful, and carefully historicized portrait of many other queer people, feminists, and communists. chapter on Lorraine Hansberry is particularly enriched by Aptheker’s triple vision.”

Aptheker is also the author of Intimate politics: how I grew up in red, Fought for freedom of speech and became a feminist rebel (2006); and Morning Breaks: The Trial of Angela Davis (1976; second edition 1999).

Aptheker, who earned his Ph.D. in History of Consciousness from UC Santa Cruz, received the National Organization for Women’s California Chapter Excellence in Education Award. She was recently named the prestigious University of California Presidential Chair in Critical Feminist Race and Ethnic Studies at UC Santa Cruz, and currently teaches an online course on feminism and social justice.

Advance reservations are required for this event and seating is limited so book your place in advance here.