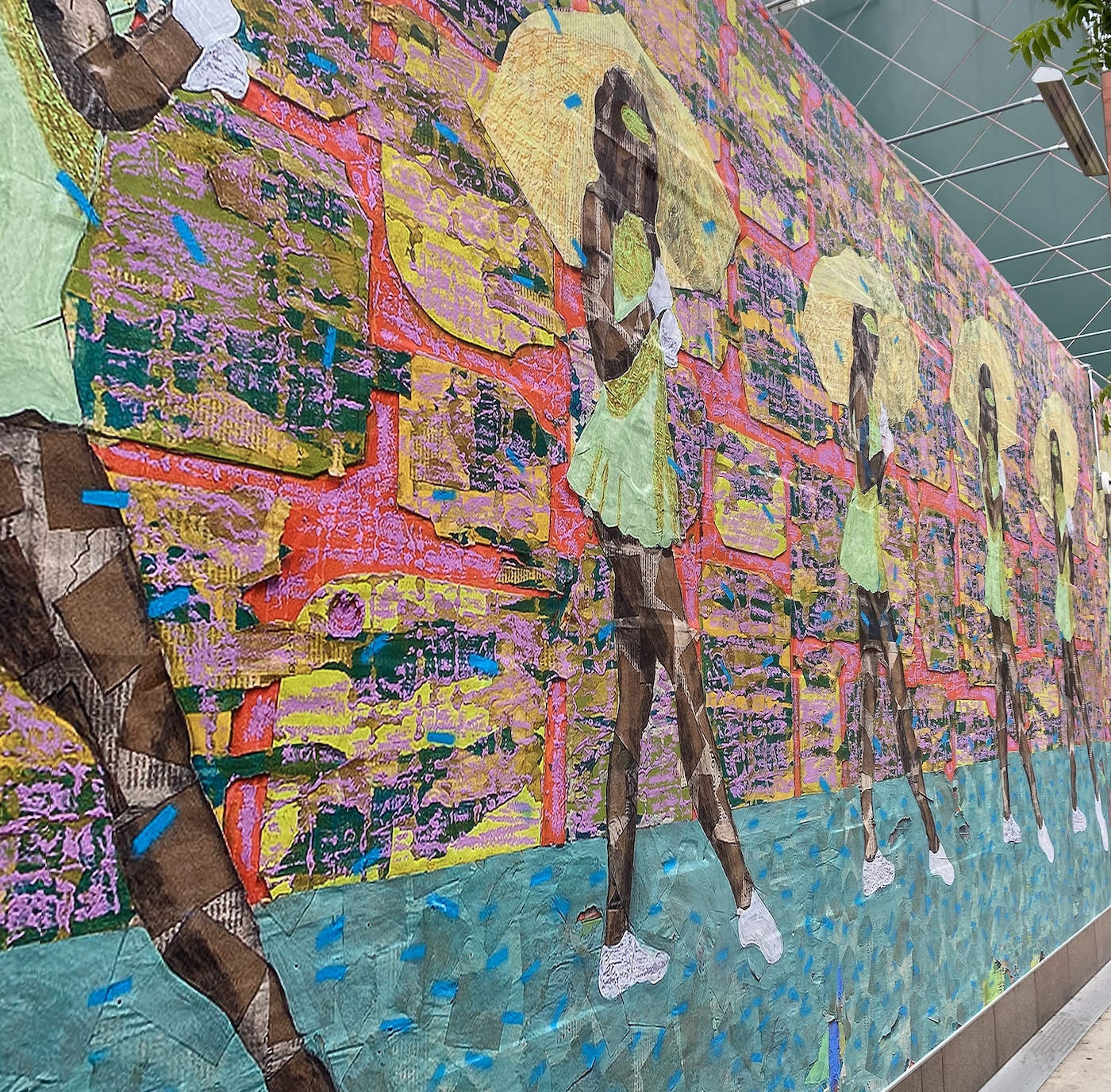 Last Thursday, April 28, just before 11 a.m., a group of museum-goers lined up along Grand Avenue in front of the Museum of Contemporary Art in Los Angeles (MOCA), waiting for it to open. Behind them, on the facade of the building, another line-up, resplendent and monumental, echoed the phalanx of visitors. A parade of uniformed black drum majors and majorettes march rhythmically down the wall against brightly colored and patterned backgrounds.

Derek Fordjour’s mural for MOCA, “Sonic Boom” (2022), features reproductions of four paintings by the New York artist, enlarged and printed on vinyl to cover more than 5,400 square feet of the entrance wall of the museum. The work celebrates the Historically Black College and University (HBCU) marching bands, taking its name from one of Jackson State University’s famous ensembles, dubbed the “Sonic Boom of the South.”

This is the first of MOCA building art series, which will feature artwork on the facades of MOCA’s two sites — Grand Avenue and the nearby Geffen Contemporary — potentially including videos and installations, according to a museum spokesperson. In line with MOCA’s Environmental Council’s sustainability mission, launched in 2020, the vinyl wrap was printed in the USA with aqueous inks and will be shredded and reused in future work by Fordjour after removal.

Seen up close, the enlarged work breaks up into a living array of colors and shapes. But seen from the other side of the main street, her dancing bodies come to life. For Fordjour, the project offered an opportunity to connect with new audiences.

“We live in a world where it is still true that for many people an afternoon at the museum is not their first option. I’m interested in reaching people who might not otherwise consider entering a museum,” Fordjour told Hyperallergic. “It’s also a wonderful way to activate a painting, to make a painting an invitation.”

Fordjour took this democratic approach to art when selecting works to reproduce for the project. He sent out a survey to all museum employees — including curators, teachers and janitors — asking them to choose from four options.

“I wanted the work they collectively chose to reflect what they thought the museum should be in terms of outward-facing messages,” Fordjour said. Their choice reflects “a collective desire to have something optimistic and hopeful” after two years of living through a pandemic.

The installation of “Sonic Boom” coincides with Fordjour’s first solo exhibition at LA’s David Kordansky Gallery, titled Magic, mystery and sleight of hand. Through her paintings, sculptures, and collaged performances, Fordjour channels the theme of magic to examine moments in African American history and the African Diaspora. Highlights of the exhibit include a daily magic show performed by Kenrick “ICE” McDonald who reimagines the role of Black Herman, one of the first prominent African-American magicians.

Fordjour’s images of the HBCU marching bands, reads a text on MOCA’s website, “symbolize the daily performance of Blackness itself.”

“There’s a built-in cultural coding that will have particular resonance in communities of color,” Fordjour said.

Last Thursday morning, Howard University alumnus Ernest McCray, an HBCU, was excitedly snapping photos of the facade across the street.

“I really appreciate that. It’s close to my heart,” he told Hyperallergic. progress.”

Even though “Sonic Boom” holds special meaning for those familiar with the traditions it depicts, Fordjour is also interested in how his works can cross borders, appealing to a wide range of viewers.

“Painting can be many things at once,” the artist said, noting that viewers can connect with “the regalia and the pageantry, the syncopation, separated from the cultural context.” He mentions that the Florida A&M Marching Band performed at the 2019 Rose Bowl, incorporating a predominantly black Southern tradition into an Angeleno institution. “It’s a way to bring together many different audiences. That’s what excites me the most. »