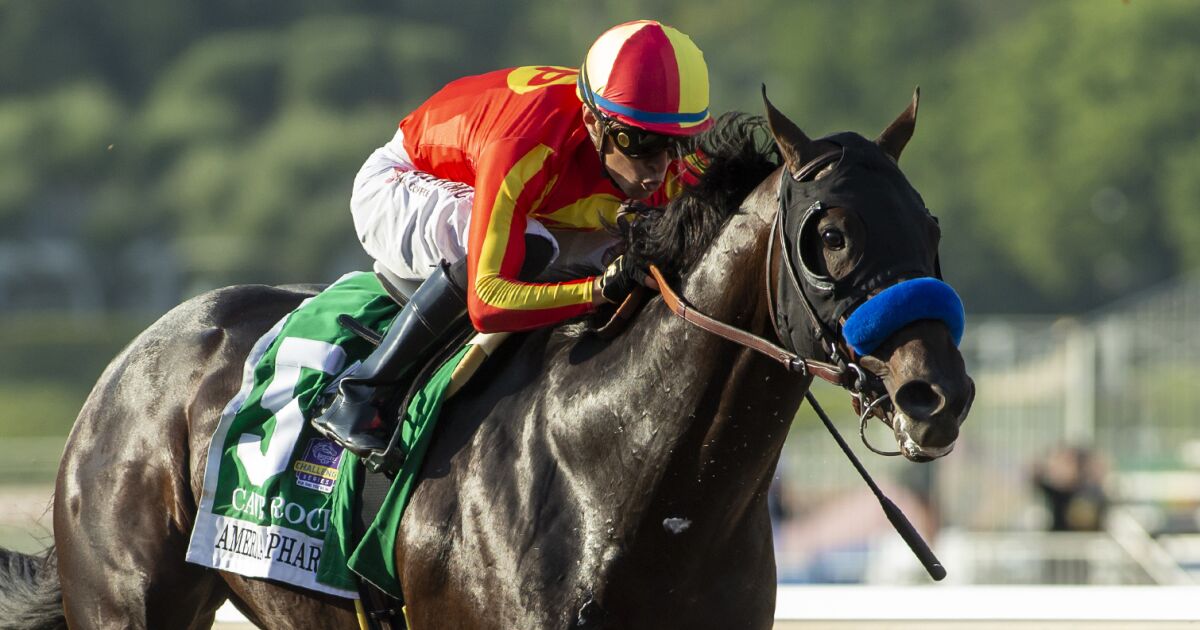 The road to the Kentucky Derby always seems to go through Bob Baffert, but rarely after a race like this. But first there’s the added issue that the Hall of Fame coach isn’t eligible to run in the Derby.

On Saturday at Santa Anita, Baffert finished first, second, third and fourth in the eight-horse $300,000 Class 1 American Pharaoh Stakes as cave rock won his third consecutive lifetime race by winning the Derby prep by 5 1/4 lengths. It was a dominating performance and gave the horse an automatic bid in the Breeders’ Cup Juvenile at Keeneland on November 4.

Cave Rock immediately went into the lead in the 1 1/16 mile race and rode the back stretch with a slight lead going into the final stretch. Jockey Juan Hernandez used the whip once at the start and then rode it easily to the finish line. Hernandez has ridden it in all three of his races, including a 5 1/4 length win in the Del Mar Futurity four weeks ago.

“I don’t remember running one, two, three, four, ever,” Baffert said. “The really good ones come quickly and he has always been different. It is constructed differently from [his sire] Arrogate. He’s powerful, stronger and he’s fast. …He just keeps getting better.

“He was looking around the corner a little bit at first, when he took the lead,” Hernandez said. “He was the whole game and after that he started to improve his pace and he kept going.”

Baffert’s presence in the Kentucky Derby is under a treacle-like trip through the Kentucky courts after Medina Spirit, who originally won the Derby last year before being disqualified, tested positive for a legal drug, but not legal on race day.

Churchill Downs, where the Derby takes place, in an unprecedented move derailed Baffert for two years. The Kentucky Horse Racing Commission suspended Baffert for 90 days, which he has already served. Baffert continues to fight to have Medina Spirit’s victory restored, along with his banishment from Churchill Downs.

If Cave Rock, or any of his other stars, looks set for the Kentucky Derby, Baffert will likely move them to another coach unless litigation changes his status. This year, his two top Derby hopefuls have moved to Tim Yakteen, who was once Baffert’s assistant.

Because Baffert was ineligible to receive qualifying points for the Kentucky Derby from Saturday’s race, only one of the 20 points was awarded, to Man Child, for his fifth-place finish.

But there’s a long way to go between now and the first Saturday in May and points earned because 2-year-olds are rarely decisive if a horse is to be a serious contender in the Kentucky Derby.

Also on Saturday’s card was the $200,000 Year 2 Chandelier Stakes for 2-year-old fillies, a qualifier for the Kentucky Oaks and a winning run for the Breeders’ Cup juvenile fillies. And Tell Me Nolies rallied three wide entering the stretch to win the 1 1/16 mile race by three quarters in length. Peter Miller’s apprentice, ridden by Ramon Vasquez, paid $18.80 to win. Uncontrollable was second and Justique was third. Like Cave Rock, And Tell Me Nolies was sired by Arrogate, who was previously trained by Baffert.

There was another Grade 1 Breeders’ Cup qualifier on Saturday’s card, the Rodeo Drive for Filly & Mare Turf racers. Going to Vegas went gate-to-wire to win by 1 ¼ length over Family Way. Go to Vegas, trained by Phil D’Amato and ridden by Umberto Rispoli, paid $7.20 to win the 1 1/4 mile race.