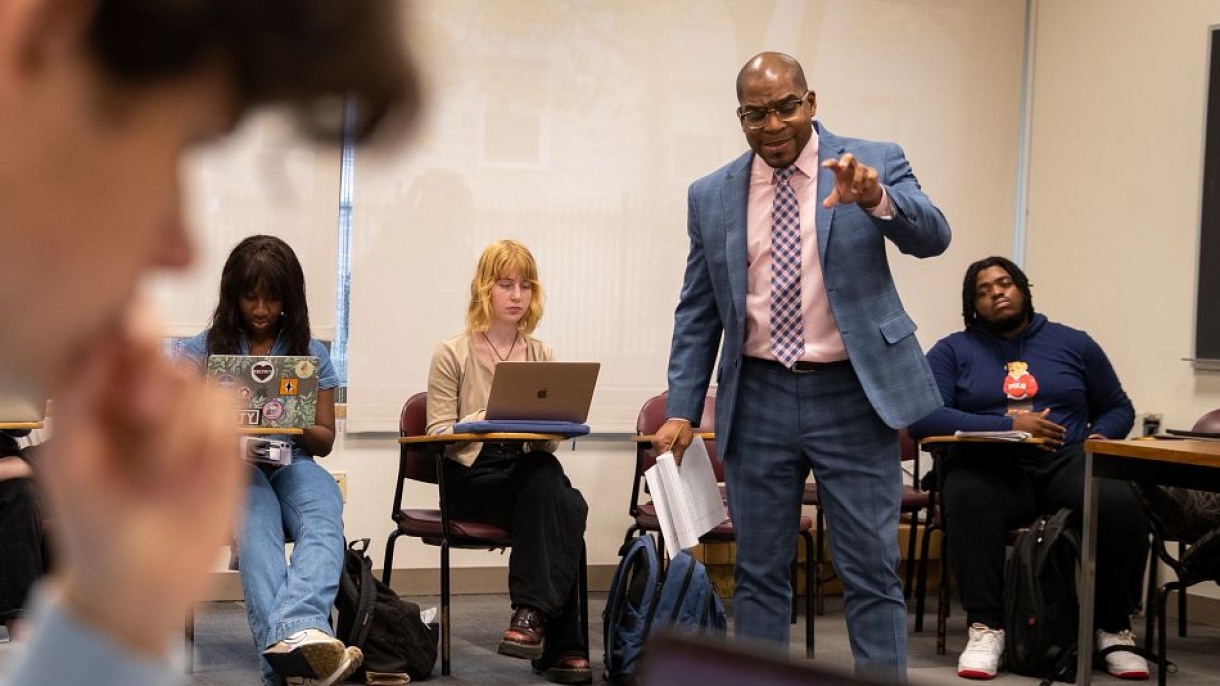 One centre, many initiatives

The PPE Center isn’t just a new research facility, Skarbek said — it’s also the host of exciting public events, a place for dynamic classes and student conversations, and the base for a number growing number of graduates and professors.

“The PPE Center seeks to both nurture undergraduate conversations and also support the newly created PhD. graduates who are trying to find their research groundwork and embark on future careers,” Skarbek said. “It’s not just about facilitating the thoughtful and open exchange of ideas among faculty, but also about keeping its doors open to the broader Brown and Providence communities so they can engage with great thinkers.” We have an ambitious mission to foster rigorous research and conversations in many different forms and places. We hope people from across campus and across the state will participate.

Skarbek said PTP programs, including the Janus Forum lecture series – which brought prominent public figures of all political persuasions to College Hill to debate the merits of coal industry divestment and the drivers of gun violence, among other topics – will continue under the PPE Center Umbrella.

In addition to the Janus Forum Series throughout the academic year, Skarbek said, the PPE Center also hosts an Odyssey Lecture Series, where influential scholars from around the world come to Brown to take the public on an extended adventure. into new and unexpected intellectual terrain. Previous Odyssey Conferences have covered topics such as the “War on Truth” and the 1971 Attica Uprising. Additionally, the PPE Workshop invites leading academics to present their current research to Brown professors and graduate students to obtain feedback, feedback and guidance, advance new knowledge and foster the development of new research projects and partnerships.

Brown students will have the chance to take a growing number of EPI-affiliated courses that cover the full range of topics, from the analysis of political behavior to the history of economic thought. Ryan Doody, Assistant Professor of Philosophy and Political Economy’s course, “Choice, Trade, and Conflict,” provides an ideal introduction to IPE by inviting students to discuss how theoretical topics such as the theory of games and distributive justice apply to climate change, universal basic income and other contemporary topics. . In years to come, EPP courses may be taught jointly by professors from disparate fields, giving students the opportunity to learn more from an academic perspective. And there’s potential, Skarbek said, for a future PPE concentration to be offered to Brown students.

Students will also be able to engage with the PPE Center through various student organizations – including the Brown Political Review, a student-run newspaper; the PPE Society, a student reading and discussion group committed to ideological pluralism; and the new Journal of Philosophy, Politics and Economics, an academic publication that will highlight undergraduate and graduate student scholarships internationally.

Much of this published research will come from the center’s growing number of postdoctoral fellows and graduates. Since 2003, a postdoctoral fellowship program has hosted more than 40 scholars whose research has focused on national security, political psychology, and other challenging topics; in the future, the EPI Center program will accommodate recent PhDs. graduates from a wider range of humanities and social science fields to diversify areas of expertise among cohorts. Likewise, Skarbek said, a planned graduate student scholarship program is expected to enrich the center’s research landscape; regular graduate seminars will allow students representing a wide variety of academic traditions to learn new principles and perspectives from one another.

Finally, the PPE Center’s affiliate faculty corps will grow over the next few years, Skarbek said, given plans to create two to three endowed chair positions and a faculty fellowship program.

Ultimately, the PPE Center, like Brown more broadly, exists to cultivate creative thinking by encouraging collaboration between groups of people who see things differently, whether because they come from different academic backgrounds or because that they had different life experiences. Because when people with different perspectives work together, Skarbek said, they often generate unique solutions to complex problems in society.

“Providing events that present a wide range of perspectives, reigniting research that challenges the status quo — I think that’s at the heart of higher education,” Skarbek said. “When people bring different values, perspectives, and ways to the table in a conversation, they learn from each other.”