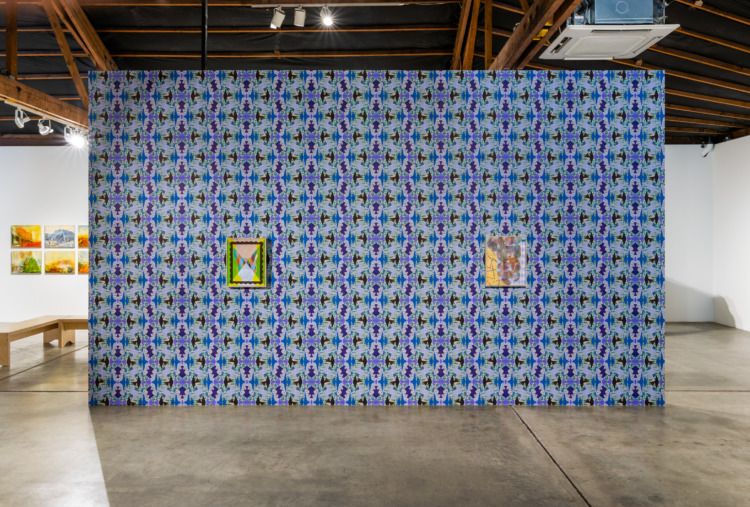 I can’t remember what social media platform I was on when I first saw Pat Boas’ installation of wallpapers and paintings. The work is at Oregon Contemporary as part of the exhibition “Hallie Ford Fellows in the Visual Arts 2017 -2019”. Yet the moment I saw the abstract patterned wallpaper paired with the two small abstract paintings on my screen, I knew I wanted to write about his contribution.

That said, I hesitated.

First, it’s notoriously difficult to write about group shows because there’s the implicit command to write about a prescribed general theme. Additionally, length constraints imposed by a publisher may necessitate that ratings of individual artists’ works remain rather cursory, thus poorly reflecting both artist and writer. There is also the potential problem of writing about the work of a particular artist to the exclusion of others in a group exhibition. If the writer decides to focus on a number of artists less than the total of those in the exhibition, there could be a slight perception. (As I’ve written about several artists in the show before, rest assured, no affront is meant. It’s just that I was struck by Boas’ installation.)

Second, writing about abstract art can be daunting, perhaps because the references drawn from the work are quite abstract on their own. Descriptors derive from oblique formal concerns or color theory, which can lead to quite a pedantic reading, which can suck the life out of the artwork. Yet equally problematic is an attempt to portray a strong emotional response from said writer about the art. The first approach seems to be objective in the extreme, and the second seems too subjective. Never mind that abstract art often escapes meaning (as in a literal understanding).

Of course, these difficulties did not prevent writers from trying to convey their impressions, nor did they prevent viewers from enjoying this art. After all, abstraction has been around for over a century now. We should feel a little comfortable with that. It’s still good when the artist herself gives us a work that is a pleasure to contemplate.

Pat Boas’ installation spans a wall 11′ high and 20′ wide, and consists of wallpaper titled Bliksem (the Dutch word for lightning) that spans the entire wall, plus two 20″ x 16″ paintings that are spaced 92″ apart. Standing well back from the wall, the dominant color of the wallpaper appears to be a purple, or possibly a violet. Upon closer examination, there are also significant amounts of aquamarine and light green. The pink and yellow lines serve to outline much of the larger color blocking.

I’m sent back to my grandparents’ house where I enjoyed appreciating the symmetry and mirroring of the repeated patterns in their 1950s fiberglass curtains. The effect here is similar, except the Boas wall vibrates and, like high voltage, crackles and buzzes. It crawls, glides and hypnotizes. This dynamism helps to enter the “logic”, or rather the strategy, of the overall installation, so much so that I do not consider the wallpaper and the paintings as separate from each other, but rather as parts of a cooperative whole.

Focusing on the wallpaper, purple or purple seems to dominate. Yet by shifting the emphasis to one (or both) of the paintings, the purple recedes in favor of the yellow. This “color bounce” certainly adds to the interest, as depending on the focus, the paintings either stand out or sink into the wall. Fixed like eyes on the face of the wall, they shatter that busy plane, but also have the potential to get lost in its patterns. The paintings are like the controls on some giant oscilloscope, but instead of turning what would be the rectangular knobs to activate the patterns, all one has to do is shift one’s gaze from concentrating on the paintings to the entire wall, then back to the paintings.

We assume that the table on the left, Sentinel (Window), draws the parenthesized portion of its title from the rectangular frame that sits in the outer edges of the table. Yet the frame appears to rest on the painting below, minus a frame and more a painted border above the rest of the painting. The series of bumps on its outer edge are reminiscent of the frame one would find around an older mirror, an impression perhaps aided by the wavy yellow lines that begin to suggest the outline of a head with a rosy forehead up with a chalky white neck. Is this the Sentinel? I ask because in the middle of this portrait there is a vanishing point, thus also suggesting a landscape. Perhaps a clue can be found in the harlequin pattern, which makes me wonder if Boas, like a jester, is having a little fun with the viewer. Also note the tension between the solid colors and the rear paint, which is then enhanced with watery yellows and darker greens. The gray, somewhat horizontal lines just below the midpoint provide some stability, like trusses against an implosion.

The other table, good listener, is in my opinion hilarious, as it rather seems to portray quite the opposite, meaning that the varied and busy parts of the painting give the impression of someone with a lot on their mind who might indeed need some someone with a listening ear. The yellow, black, and beige grid graphic runs wild along the falling boulder-like shapes. Again, the harlequin motif may suggest that a joke is again at play here, or even the perception of a Shakespearian fool where the reality is quite the opposite. Curiously, however, rather than resting on the harlequin pattern as some kind of commentary on the other elements, for a break my eye pulls back to the little green bar in the top right corner.

When I’m ready, I take a step back and let the set redo its work, which, when I think about it, has been my relationship with Pat Boas’ work since we first crossed paths there. ten or twelve years ago. back. There are some interesting concepts behind her art, as well as an execution that rewards time spent with her work, which is perhaps why she’s increasingly getting the attention she deserves.

Note: The exhibition at Oregon Contemporary is the second iteration of this group exhibition of these particular Hallie Ford Fellows. The first exhibition took place at the Jordan Schnitzer Museum of Art at the University of Oregon in Eugene, Oregon. Both were organized by Los Angeles curator and author Jenelle Porter (who, oddly enough, was also a lawyer for the Hallie Ford Family Foundation’s 2020 awards cycle). For the Schnitzer exhibition, Boas presented quite different work (as did a number of other artists), which did not involve wallpaper. However, this is the second time Boas has exhibited wallpaper as part of his installation, the first being in 2021 for Facts, not words at the Sun Valley Museum of Art, Ketchum, ID.

The Oregon Center for Contemporary Art is located at 8371 North Interstate Avenue and is open Friday, Saturday, and Sunday from noon to 5 p.m. The exhibition “Hallie Ford Fellows in the Visual Arts 2017-2019” is open until March 20.

Patrick Collier is an artist who has written for the Midwest magazine “The New Art Examiner”, as well as for the online journals UltraPDX and PORT. He holds a BA in Philosophy and an MA in English Literature from Southern Illinois University at Carbondale, as well as an MFA from the University of Illinois at Chicago. Before moving to Oregon in 2003, Collier and his wife operated the Chicago gallery in good faith for but not financial success. They live in Corvallis.