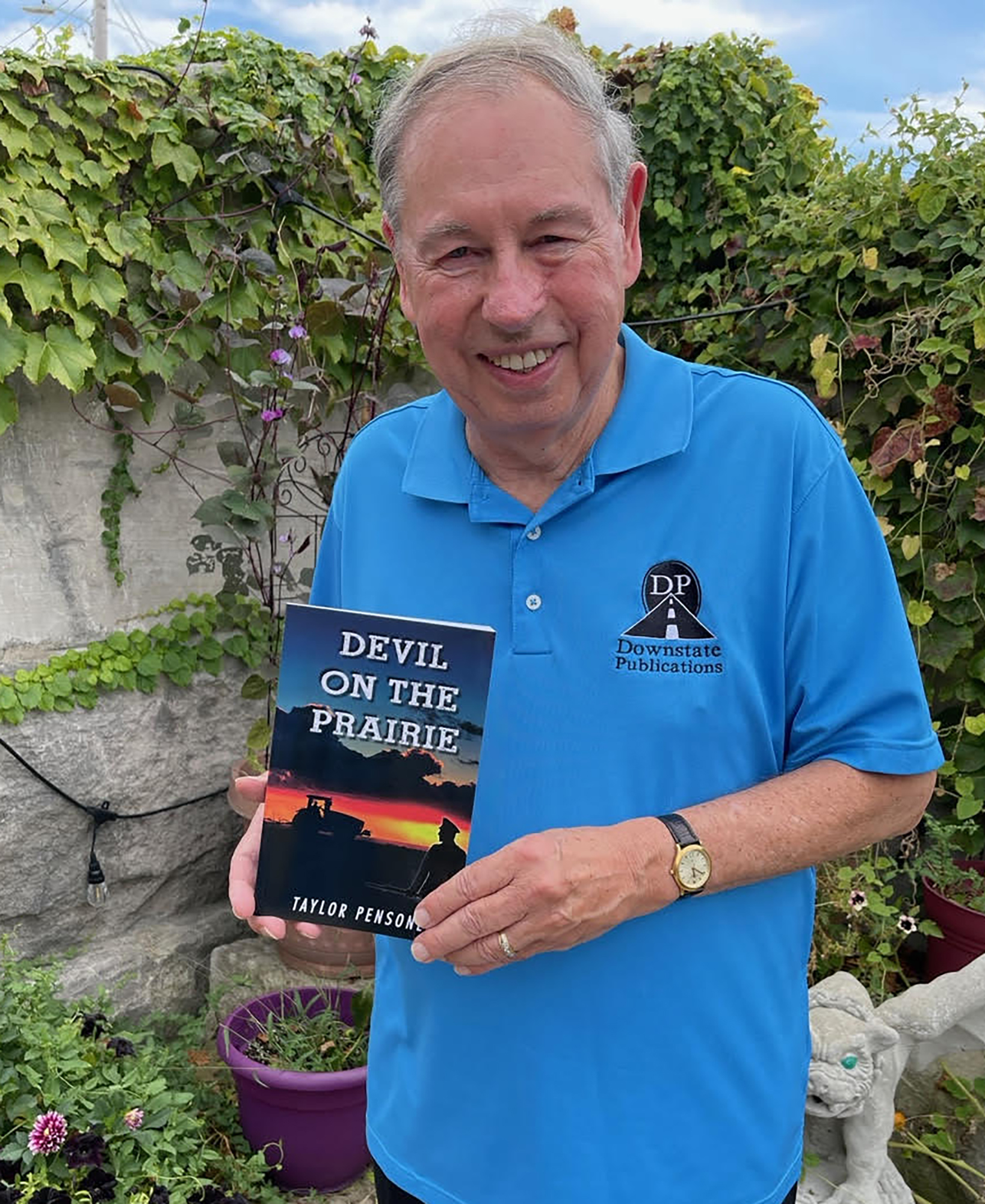 A veteran journalist takes on the Nazis in a new novel

As a seasoned political journalist, Taylor Pensoneau placed great importance on precision and realism. Today, as an accomplished fiction writer, he does the same.

Pensoneau just released “Devil on the Prairie” (Downstate Publications, $18.95), an intricately written detective novel that captures readers with suspense and plenty of sidebars. The fast-paced work weaves into real-life locations across the Midwest to provide a sense of place and set a realistic tone.

“Many of the scenes in the book take place in real-life locations in southwestern Illinois, St. Louis and elsewhere,” Pensoneau said. “I visited many of these places in my youth and in my work as a journalist.”

Pensoneau, who lives in New Berlin, was a leading political writer for the St. Louis Post-Dispatch in the 1960s and 1970s. He was based at the Illinois State House for much of his time. with the Post-Dispatch, but also covered some of the defining moments in national political history, including the Watergate hearings.

He went on to produce a series of acclaimed political biographies, including portraits of Illinois Governors Richard Ogilvie and Dan Walker. Pensoneau also created works about Southern Illinois gangsters – including the Shelton Brothers and Charlie Harris – which proved very popular with readers.

Today, Pensoneau enjoys reinventing himself as a talented novelist.

“I hadn’t written anything but non-fiction and wanted to try my hand at writing fiction,” he said. “I just wanted to have more freedom to write, develop characters and introduce fictional realism.

“I no longer have the fire in my stomach to manage non-fiction. It requires so many interviews and so much research, and I don’t want to do it anymore. With fiction, I can sit right here in my office and do almost anything that needs to be done.

“Devil on the Prairie” is the third installment in a trilogy that follows Jake Brosky, a gritty investigative reporter for the fictional St. Louis World. The book comes after “The Summer of ’50” and “Falling Star”, both of which were well received by readers.

In “Devil on the Prairie”, Brosky is tricked into tracking down the murderer of two acquaintances, and in doing so, connects the death to a Nazi war criminal living on the Illinois prairie as a farm machinery executive. Brosky’s determination as a researcher and investigator combines with his unyielding personality as he seeks to expose the Nazi and bring him to justice.

Although it features many characters in a wide range of scenarios, Pensoneau manages to iron out all the issues and deliver a clear outcome.

The story takes the reader through Illinois and the Midwest, the Spanish Civil War, the Holocaust, and the nation’s capital while dealing with political, business, and social themes.

“This book was an opportunity for me to write about one of those Nazi monsters, and I take personal pleasure in seeing them hunted down, both in fiction and in real life,” Pensoneau said. “Many of the topics in the book are ones that interest me personally and I wanted to capture them in my story.”

Pensoneau is often asked if he sees himself in Brosky, and to some extent he does, he said.

“Yes, but not literally,” he said. “Brosky’s story is a bit of a taste of mine in my role with the Post-Dispatch, although I approach my work differently than Brosky. Like Brosky, I’ve never taken a lot of situations at face value. literally, because you can’t when you’re dealing with politics, like I was.”

Brosky also has a different approach to his work.

“Brosky has two fists and drops the hammer on people, which wasn’t like me,” Pensoneau said with a laugh. “I’ve always tried the velvet feel. I was more direct than him, because he uses underhanded tricks to get what he wants.

Pensoneau is working on a fourth novel with Brosky as the main character.

Despite his success in fiction, Pensoneau still masters the craft, he said.

“I love how you can manipulate people and situations in fiction,” he said. “You can create characters and make them whatever you want them to be, good or bad, curious or whatever.

“The power you have in writing fictional characters is truly remarkable. I even have the power to kill them, and that’s a lot of power. Fiction challenges your imagination. Writing books like ‘Devil on the Prairie’ is much more fun than writing non-fiction, at least in my experience.

Tom Emery is a freelance writer and historical researcher from Carlinville. He can be reached at 217-710-8392 or [email protected]