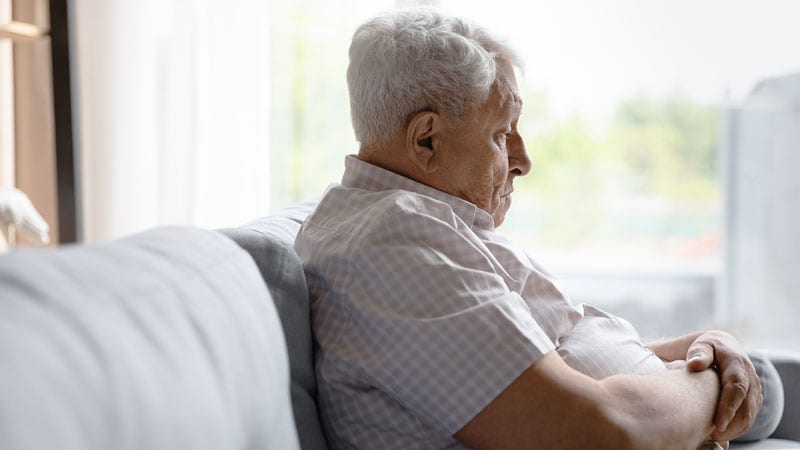 New study sheds light on neurological underpinnings of end-of-life the Depression (LLD) with apathy and its often poor response to treatment.

Disturbances have been found in the resting-state functional connectivity (rsFC) between the salience network (SN) and other large-scale networks that support goal-directed behavior, particularly in patients with dementia. depression who also had features of apathy.

“This study suggests that, in older adults with depression, distinct network abnormalities may be associated with apathy and poor response to first-line drug therapy and may serve as promising targets for novel interventions,” write Researchers.

The study was published online July 27 at JAMA network open.

A major cause of disability

LLD is a “leading cause of disability and medical morbidity in the elderly,” with one-third to one-half of LLD patients also suffering from apathy, the authors write.

Older adults with depression and comorbid apathy have poorer outcomes, including lower remission rates and poorer response to first-line antidepressants, compared to those with LLD who are not apathetic.

Despite the high prevalence of apathy in people with depression, “little is known about its optimal treatment and, more broadly, about the brain mechanisms of apathy,” note the authors.

An “emerging hypothesis” points to the role of a compromised SN and its large-scale links between apathy and poor treatment response in LLD.

The SN (which includes the insula and the dorsal anterior cingulate cortex) “assigns motivational value to a stimulus” and “dynamically coordinates the activity of other large-scale networks, including the executive control network and the in default mode (DMN).”

Preliminary studies of apathy in patients with depression report reduced volume in SN structures and suggest disruption of functional connectivity between the SN, DMN, and executive control network; but the mechanisms linking apathy to poor response to antidepressants in LLD “are not well understood.”

“Connectometry” is a “new approach to diffusion MRI analysis that quantifies the local connectome of white matter pathways”. It has been used with resting state imaging, but it had not been used in the study of apathy.

The researchers studied the functional connectivity of the SN, hypothesizing that alterations in connectivity between key nodes of the SN and other central circuits that modulate goal-directed behavior (DMN and the executive control network) were involved in people with depression and apathy.

They applied connectometry to “identify pathway-level disturbances in structural connectivity”, hypothesizing that compromise of frontoparietal and frontolimbic pathways may be associated with apathy in patients with LLD.

They also wanted to know whether network abnormalities related to apathy were associated with response to antidepressants after 12 weeks of pharmacotherapy with escitalopram, a selective serotonin reuptake inhibitor.

They also completed a battery of neuropsychological tests to assess cognition and underwent MRI imaging. fMRI was used to map group differences in the rsFC of the SN, and diffusion connectometry was used to “assess pathway-level perturbations in structural connectivity”.

Of the participants, 20 had clinically significant apathy. There were no differences in age, sex, level of education or severity of depression at baseline between those who had and those who did not.

Compared to participants with depression but no apathy, those with depression and comorbid apathy had a lower rsFC of salience network seeds (specifically, the dorsolateral prefrontal cortex [DLPFC]premotor cortex, medial cingulate cortex and paracentral lobule).

They also had greater rsFC in the lateral temporal cortex and temporal pole (z > 2.7; Bonferroni’s corrected threshold of P

Additionally, participants with apathy had lower structural connectivity in the splenium, cingulum, and fronto-occipital tract, compared to those without apathy (you > 2.5; corrected false discovery rate P = .02).

Of the 27 participants who completed treatment with escitalopram; 16 (59%) achieved remission (defined as HAM-D score

In regression models, the lower insula-DLPFC/median cingulate cortex rsFC was found to mediate the association between baseline apathy and persistent depression.

The SN results were also relevant for cognition. Paracentral inferior dorsal anterior cingulate-DLPFC/rsFC was found to be associated with residual cognitive difficulties on measures of attention and executive function (β [df] =.445 [26] and β [df] = 0.384 [26], respectively; for each, P = 0.04).

“These findings support an emerging model of apathy, which proposes that apathy may result from dysfunctional interactions between core networks (i.e., SN, DMN, and executive control) that support motivated behavior,” write the researchers.

“This can result in failure of network integration, leading to difficulties in salience processing, action planning, and behavioral initiation that manifest clinically as apathy,” they conclude.

One limitation they note was the lack of longitudinal follow-up after acute treatment and a “relatively limited neuropsychological battery.” Therefore, they could not “establish the persistence of processing differences nor the specificity of cognitive associations.”

The researchers add that “novel interventions that modulate the interactions between affected circuits may help improve clinical outcomes in this distinct subgroup of older adults with depression, for whom there are few effective treatments.”

Commenting for Medscape Medical News, Helen Lavretsy, MD, Professor of Psychiatry in Residence and Director of the End-of-Life Mood, Stress, and Well-Being Research Program and Integrative Psychiatry Clinic, Jane and Terry Semel Institute for Neuroscience and Human Behavior, David Geffen School of Medicine, UCLA, said the findings “may be used in future studies targeting apathy and the underlying neural mechanisms of brain connectivity.” Lavretsy did not participate in the study.

Batya Swift Yasgur, MA, LSW, is a freelance writer with a consulting firm in Teaneck, NJ. She is a regular contributor to numerous medical publications, including Medscape and WebMD, and is the author of several consumer health books as well as Behind the Burqa: Our Lives in Afghanistan and How We Escaped to Freedom (the memoirs of two brave Afghan sisters who told her their story).

Is the newly launched Russian spacecraft a spysat stalker?