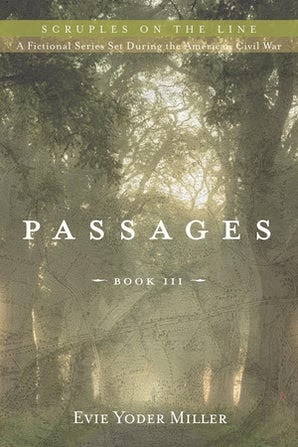 A fictional series set during the Civil War

Summary of the scruples on the line:

Authentic voices shape this fresh take on a familiar story, the Civil War. While the war provides the chronological framework for this trilogy, the narrative grip passes through the eyes of civilians, those who are usually anonymous and missing.

Beginning with the rapid rise in tensions between North and South in 1859 and continuing until May 1865, this series of three historical fiction books (Shadows, Loyalty, and Passages) follows the evolution of Anabaptist groups. From the Shenandoah Valley in Virginia to Chicago and Iowa, five narrators recount the experiences of the German Amish, Mennonite, and Baptist communities of conscience.

Trapped in conflicts of government obedience and historic refusal to participate in war, many of these figures with their families and churches in agrarian settings face demands from starving soldiers for grain and animals. Add to this the unpredictability of military conscriptions and local pressures, and the men must choose between enlisting, hiding, fleeing, buying a replacement or paying a royalty. The trauma also becomes personal for the women and children who are left to their own devices, while despair takes hold of the armies of the Union and the Confederation.

At the end of the Book III series, the spotlight is on the Mennonites and German Baptists in the ravaged Shenandoah Valley of Virginia. But no one can escape the scope of war. Not a young Amish girl in West Virginia, not an elderly bishop in Iowa, not even an increasingly successful young businessman in Chicago can stay safe. Despite their human limitations, the five narrators show courage, faith, adaptation and survival.

These books will challenge, dismay, and shine the light of resilience for readers determined to align today with peaceful action rather than violence.

Disclaimer: The views and opinions expressed in this article are those of the authors and do not necessarily reflect the official policy or position of Religion News Service or the Religion News Foundation.

What will they steal in the end?