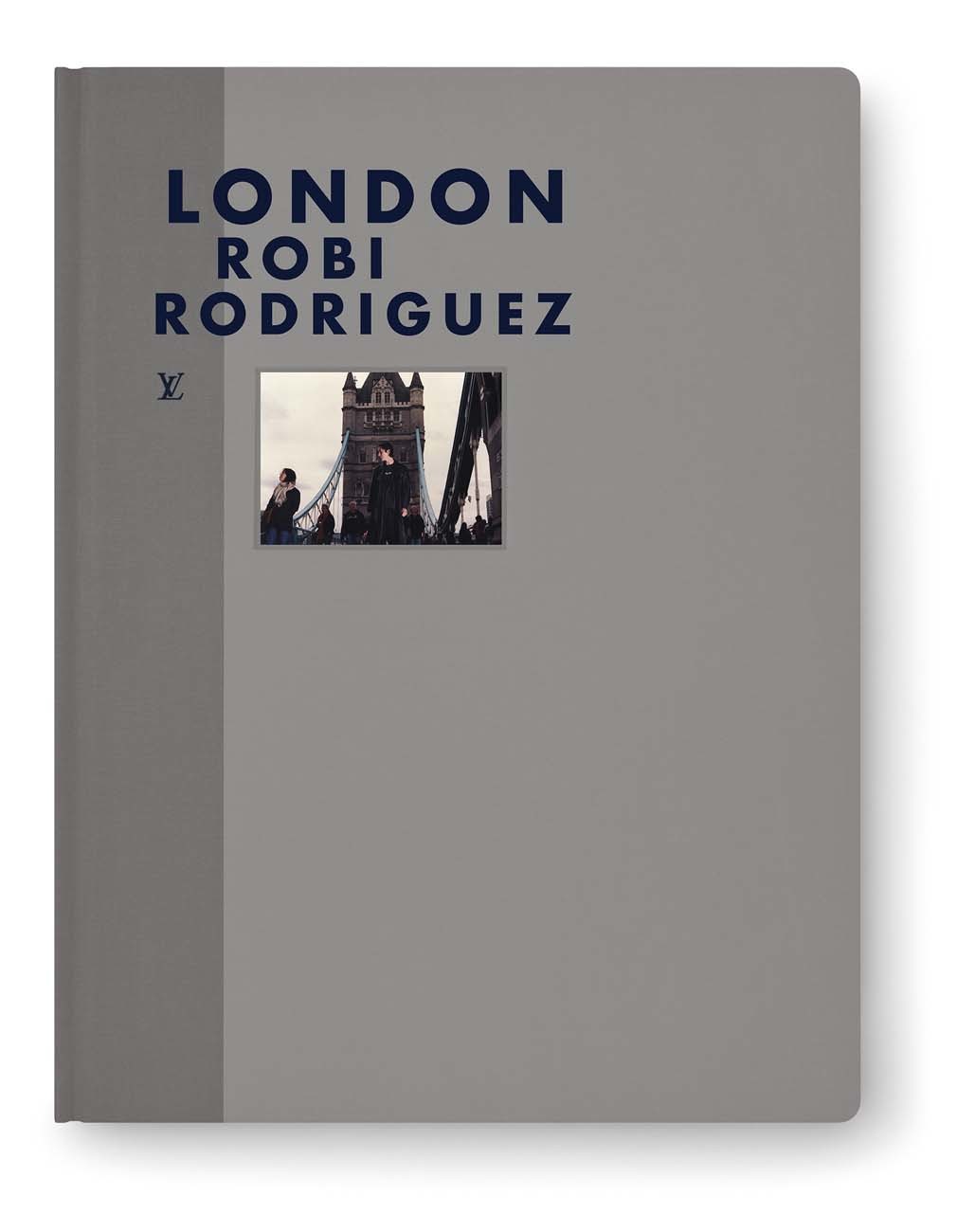 A fictional London by Robi Rodriguez

Synonymous with the art of travel since 1854, Louis Vuitton continues to add titles to its â€œFashion Eyeâ€ collection. Each book focuses on a city, region or country seen through the eyes of a photographer. For the first time, the collection focuses on the British capital. Robi Rodriguez imagines a cold London, in the shadows and in fiction.

â€œSee great art from around the worldâ€ *. Robi Rodriguez’s London begins with a warning shot, or a shot of irony, as the case may be. The injunction is inscribed on the pediment of the Tate Modern. We find the building and its mantra at the opening of the book. A wide view from the Millennium Bridge, where the museum, designed as a block, stands out against the white of a pale sky, a crowd of absent faces, a wintery light in low angle, and the discreet presence of the Millennium Bridge.

In this shot, fragments of the Spanish photographer’s London are being made. A coherent, homogeneous puzzle, pleasant to put together, which unfolds in the book, page after page. Unfamiliar and often lonely faces can be seen. In these faces, looks caught in the dark, playing with shadows and light. And all around these solitary actors, emblematic places of the British capital, the Thames, bridges, low-angle street corners.

But let’s come back to this double first page. The sentence is not negligible. This is the photographer’s very first London fragment. A few pages later, other typographies, other pediments in capitals, other lettering appear. The Hayward Gallery in a play of lines and curvesâ€¦ The National Theaterâ€¦ The London Bridgeâ€¦ New Scotland Yardâ€¦

These enumerations in full, mainly of places, would at first sight indicate a simple geographical reality. Here is London, here is a new page of street photography, as one would find Tokyo by its calligraphic signs or Paris by its names of cafes printed on the fronts of the terraces. A place, another place and for those who know not to linger, a simple stroll in the city. This story would be quite simple. But it is not forbidden to think that the signified has a little something extra.

Rodriguez’s inscriptions are read in relation to the street, to those who live there and to the elements that stand out there. The lettering acts as a repellant. Where the National Theater sign stands out in the foreground, the body of an actress lost in a concrete structure appears discreetly, crushed by the camera as by the building – almost a tragedy, transposing the theater to the picture.

Where New Scotland Yard stands out, a sad-faced woman wanders, looking white in her dark clothes. Without the sign and the evocation of the headquarters of the metropolitan police, the image would add to the (pleasant and) romantic lexicon of clichÃ©s of sad people. Rather than documenting it, or the situation, the sentence acts on the imaginary of the image. The pediment gives it a theatricality. Is she a victim? A guilty person ? A policewoman?

By pulling too hard on the image and its meaning, the imagination takes precedence over the print. Let us admit the process, since the photographer pushes us to search for his images: “their senses must be echoed”. To photograph London is to see it differently from what it is. You have to imagine it, and at the same time look at the book, through the prism of lies, through the prism of deception, of fiction. These images are nothing more than pretenses. â€œThis story aims to offer something other than the daily reality of the city,â€ reveals Rodriguez. And nothing is more deceptive than reality.

The graphic composition of the photographer and the graphic designers (Lords of Design) subtly overtakes the very idea of â€‹â€‹film, and therefore of fiction. The images are repeated at the bottom of the page, shifted onto the image, reproduced as if the silver film had jumped onto photosensitive paper. When reading, this process gives the sensation of unrolling a film, or of reading a contact sheet, and of seeing the images jump all over the place to retain only scraps that would strike the imagination.

It’s a simple find that expresses all the powerful brevity of a flash. How many times have we wanted to fix in our memory a look that we saw in the street? A closed face, a tense mouth, a hard or happy eye? The feeling of surprise that often immediately fades, as the retina re-imagines itself, reenacts people all along the street. The faces follow one another in Rodriguez’s book like so many echoes. Her London is a flash of light, and her color is shadow and her shine is bursting.

There are silhouettes in the distance in the cut-out of a ledge, then bodies brandished head-on, faces sometimes suspicious and sometimes threatening, boastful and questioning bodies. Forced poses that make people look taller or make them look like fools. A crowd that is never gathered and heads that never have their whole body. And all this multitude disappears and reappears, like a haunting dream. The pages turn and the echoes still echo, fade, disappear on one word: dreams.

Mainz Biomed acquires the exclusive rights to a new mRNA