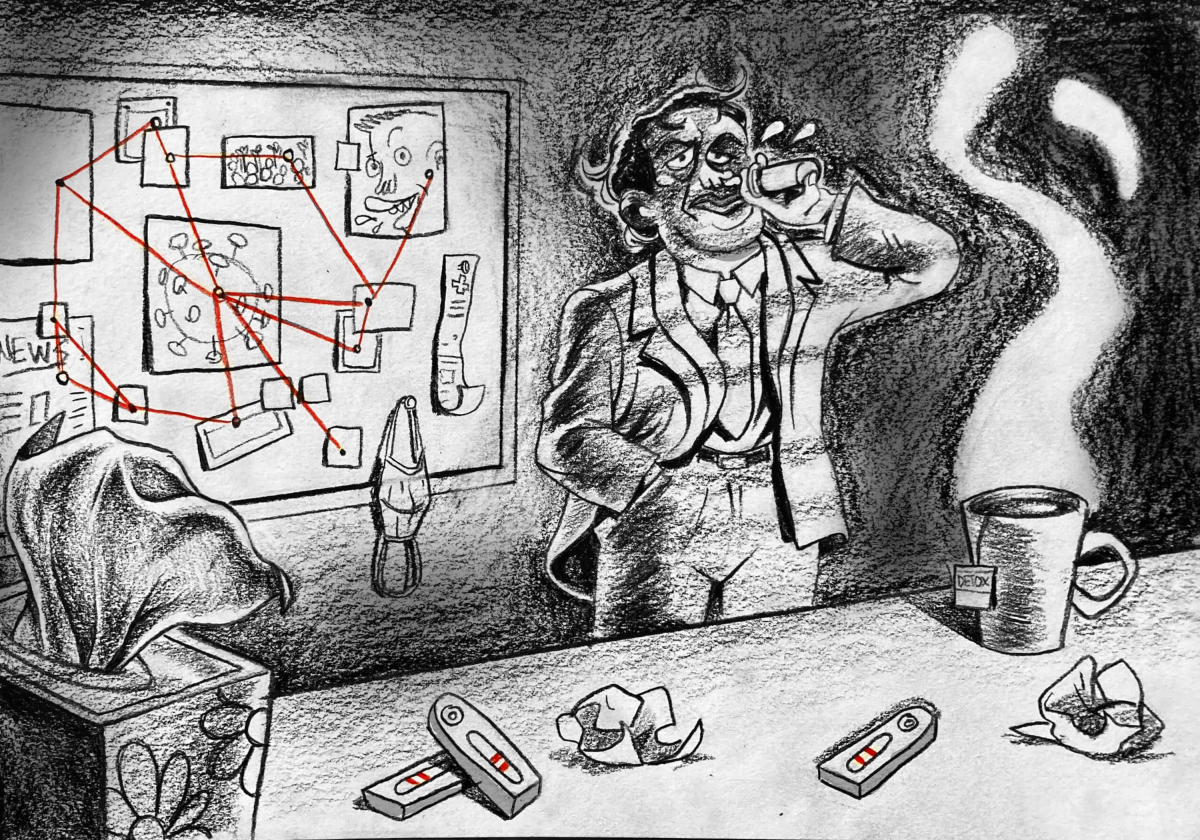 After two and a half years in this pandemic, I caught COVID-19 for the first time and I’m going after the son of a gun who

I have been lucky not to contract COVID-19 so far; yet, testing positive proves that I am not invincible.

Nevertheless, now is the time for me to use my five days of quarantine by investigating who is responsible for giving me the virus. I narrowed it down to a few suspects. In my view, these are unnecessary, disgusting and horrific harm to public health.

I now use my imaginary corkboard. It’s pierced with metaphorical thumbtacks holding the string connecting each feverish hypothetical I conjure to each other. A cigarette is inappropriate. So, I rely on Vicks VapoRub vapors to create the smoky atmosphere of film noir in my cramped bedroom in Lachine.

Suspect #1: The end of mask mandates

The obligation to cover the mouth and nose was lifted in mid-May. So blaming the Government of Quebec for my illness nearly three months later is overkill.

That being said, there are members of the public who have expressed frustration with Health Minister Christian Dubé’s directive.

In fact, with the recent spike in COVID cases from the seventh wave, media voters not reporting any new safety restrictions come as a surprise to me. Therefore, the three-month mask-free period does not prevent security measures from arousing my suspicions. So he earns a spot on my fake shame chart.

I mean it with every fiber of my being when I say that, pandemic or not, public transport is disgusting. Whether it’s the claustrophobic compound where illnesses worsen, to be expelled hopefully through the two-inch gap between windows, or the frequent game of guessing the seat liquid to which many passengers got used to playing.

The funny thing is that I used the Société de transport de Montréal during the entire course of the pandemic. For me, getting sick from the STM is not abnormal, but neither do I believe that public transport worked alone in this attempt to change my diet to soup and multivitamins.

The mask mandate for public transport was lifted on June 18. It makes forgetting a mask as I sprint to catch the bus less of a concern. That being said, there is still an obviously serious risk of not wearing a mask in this Petri dish-like environment. I wouldn’t be surprised if a bus full of maskless passengers is the reason I have to clean my nose daily.

Oh yes. A twisted resolution to which Agatha Christie herself would shed a tear.

I said it earlier; I am not invincible. No one is. All this talk about “who is responsible” boils down to this, responsibility. Having received two vaccines and one of the two possible boosters is only a partial necessity. Public safety also comes down to the small perceived things. Regularly sanitizing hands and surfaces, wearing a face covering whenever necessary, and staying physically distant from others are all things that, at times, I ignored as the pandemic progressed.

I believe it is in my power to protect myself and those around me from the virus. Catching COVID was a tough wake up call for me. The cancellation of health and safety mandates led to a return to normal, but by taking advantage of these societal releases, I endangered my well-being and that of others. Feeling this way, I resolved to no longer neglect my commitment to the welfare of every citizen with whom I come into contact.

For now, I sit in my silly little room and sip my silly little lemon ginger tea. But, just so the scumbag out there knows; You gave COVID to the six-foot-tall bad sportswriter, and I’m coming to get you.

Conor Tomalty is The linkis Vol. 43’s sportswriter. If you stretch him he is six foot five but due to poor posture he is only six foot four | women in sport.